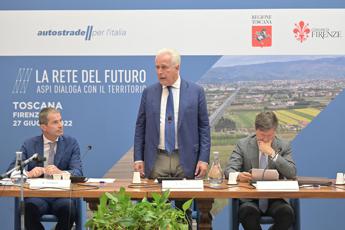 I have to recognize Aspi great concreteness and determination “

“The point made today with Società Autostrade is very important because it gives us back the image of a modern Tuscany that goes forward by implementing the agreements made with commitment and on time. An essential synergy for the infrastructural development of Tuscany. I am thinking, for example, of the new route with the longest three-lane tunnel in Europe between Barberino and Calenzano, upon completion, in Osteria Nuova, in the Municipality of Bagno a Ripoli, of the third motorway lane, work in progress to allow for the installation of an additional tunnel next to the existing one of San Donato. Of course there are many things to do and they are those on which we as a Region are strongly committed. First of all the third lane Florence – Prato – Pistoia which passes from the realization of the Peretola junction, and a whole series of complementary works, connected to the current route of the third lane. The negotiation that we will do on the project for the third lane up to San Giovanni Valda is also important rno and beyond. I must recognize Aspi great concreteness and determination. “This was said by the president of Tuscany, Eugenio Giani, at the seminar” The network of the future. Aspi dialogues with the territory “dedicated to the plan to upgrade and modernize the motorway network in Tuscany which took place in the Sala Pegaso of Palazzo Strozzi Sacrati in Florence, seat of the presidency of the regional council.


The meeting was an opportunity to carry on the dialogue with the various political and economic realities of the territory, as well as to define the structure of the new investments – already planned or under study by the concessionaire – with a view to improving infrastructure efficiency motorways in the region.

The seminar was attended, in addition to Eugenio Giani, by the managing director of Autostrade per l’Italia Roberto Tomasi, the mayor of the Metropolitan City of Florence, Dario Nardella and many mayors of the Tuscan municipalities.

Tuscany is one of the areas most affected by Autostrade per l’Italia’s development and modernization program, with an investment plan of almost 7 billion euros, of which approximately 6.5 will be for new works. A tight schedule that carries out the regeneration of the original route of the two main arteries of the region, expanding them and adapting them to the new mobility standards, with a view to decarbonisation and according to the principles of sustainability.

“This morning – added the mayor Dario Nardella – we had a very fruitful discussion with local authorities, the Region and the Highways. The good news is that the construction site of the Peretola junction has begun, a very important junction for the city and the metropolitan area and for access to the A11, where in the meantime work on the third lane will begin. The start-up of the A1 construction sites from Incisa in southern Florence was also successful. During the discussion I then relaunched the goal of creating a ‘twin’ of the Villa Costanza parking exchanger which would be in Osmannoro, between Florence north and Scandicci, and in the meantime the design of the Scandicci junction is also going ahead. In total, therefore, we have a billion and a half of interventions in the process of being set up “.

In fact, works for 4 billion euros have already been completed, thanks to a total work of over 45 million hours that has never stopped, not even during the country’s lockdowns due to the Covid-19 pandemic. An upgrading plan that involved 80 km of the Tuscan network and which is currently continuing on a further 49 km, pending the completion of the approval process for the remaining major works planned.

Work continues on the redevelopment of the original carriageways of the A1 between Barberino and Firenze Nord, after the inauguration of the new route with the longest three-lane tunnel in Europe. During the activities, which will have a total duration of approximately 30 months, the construction sites will operate with a limited impact on the road network, guaranteeing in each phase two lanes towards Bologna.

Also in A1, the works to upgrade the section of about 12 km between Florence South and Incisa heading south are about to start, completing what was already open to traffic last summer. The project for the construction of the third lane for a further 18 km in length is also being approved, partly on site and partly in a variant of the route, up to the Valdarno, for a total value of over 600 million euros.

About 40 months are then expected to complete the construction of the third lane of the A11 between Florence and Pistoia. An intervention of around 600 million euros, for which the construction site has already begun and which in the autumn will enter the intensive phase of the time schedule.

“The dialogue with the territory and the sharing of choices is an essential element for us. Today we have brought to this region a format that we intend to replicate in all areas affected by the network managed by Autostrade per l’Italia. In Tuscany we are carrying out with constancy and determination a large part of our national plan to upgrade and modernize the network: it is precisely in this region that we can quantify and touch the benefit generated by the interventions completed in recent years, both in terms of usability. network and travel experience, made better and more sustainable also thanks to the innovative use of technology. Interventions that we consider essential also with a view to relaunching the economy of the territory and of the country “. declared Roberto Tomasi, managing director of Autostrade per l’Italia, who concluded: “these are results obtained also thanks to the support of Mims and the direct commitment of the Minister’s technical structures”.

During the seminar, the point was also made on the progress of the modernization plan launched in A1 which in a first phase, already completed, concerned part of the tunnels of the Tuscan network. A program of approximately 540 million euros intended to keep the main infrastructures of the network, such as bridges, viaducts, safety and noise barriers, in addition to the galls, performing and functional