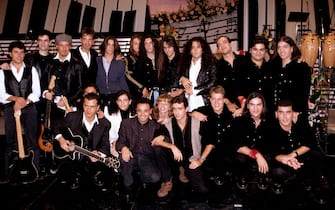 Irama and Grignani will duet in the evening cover with My story between my fingers, a song that in 1994 the singer presented to the public of Sanremo Giovani (in the photo Grignani is the fifth at the top starting from the left)

“I will have the pleasure and honor of sharing the stage with a real rock star, who has lived in contrasts – said Irama di Grignani on Billboard – For me he, for better or for worse, is a great artist”

WATCH THE VIDEO: Gianluca Grignani, the 7 most famous songs

In 1995 he made his debut in New Proposals, at the Sanremo Festival, with the song Destination Paradise, which immediately became a huge success

Sanremo Festival 2022, the lineup of the fourth evening

In 1995 Gianluca recorded his first album, Destination Paradise, which sold two million copies in just one year and also launched it in the South American market.

In 1996 the album The plastic factory was released, which divided the audience for the experimental and rock character of the work

Gianluca Grignani, the 10 most famous songs

In 1999 Grignani made his second appearance at the Sanremo Festival with Il Giorno Perfetto, a song that also gives the title to his first collection of hits

In 2002 Grignani participates for the third time in Sanremo with Lacrime dalla luna, a song that preludes the release of the album Uguali eiffer, which reaches the top of the charts thanks above all to the tow of the summer hit L’aiuola

The singers of Sanremo 2022, Irama on the stage of the Ariston PHOTO

After a few years of excesses and turbulence, including the use of cocaine, in 2003 he published Succo di vita, second collection of successes

In 2006 Gianluca Grignani still participates in the Sanremo Festival where he presents the song Liberi di Sognare, eliminated in the first round, but which gets a good radio response

In February 2008, at his further participation in the Sanremo Festival, he ranks eighth with Cammina nel sole

He also participates in the 2015 Sanremo Festival with the song Sogni infranti, finishing in eighth place.