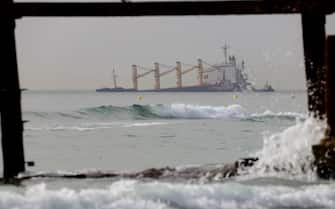 A oil tanker 178 meters, carrying 183 tons of oil, 250 of diesel and 27 of lubricant on board, threatens to sink after a collision with a freighter with LNG off the coast of Gibraltar. This was denounced by the government of the British territory anchored in southern Spain

The impact occurred on the evening of Monday 29th August. The bow of the “OS 35” with Tuvalu flag is located on the seabed, two hundred meters from the beach of Catalan Bay, on the east coast. Divers spotted a hole of ten meters by four on the hull. The tanker was headed from Gibraltar to Vlissingen, the Netherlands

500 thousand liters of oil in the sea, California is the risk of environmental disaster. PHOTO

Of the barriers 400 meters long, they were immediately placed between the ship and the beach for safety. I 24 crew members they are on board, in a place where they are not in danger of life and from which they can be evacuated at any time

The authority of Gibraltar and the Spanish ones are working for secure the cargo ship, still stuck in the waters of the Strait

The ship’s crew remained unharmed and are still aboard the ship while it is hull suffered significant damage. According to the latest update from the Government of Gibraltar, specialists have begun operations to remove the cargo from the point located in front of the Beach of the Catalans (Catalan Bay) where it was placed after the accident

In addition, the possibility of remove the fuel load which is on board the cargo, for avoid polluting losses. The other ship involved in the accident did not suffer significant damage

Yesterday afternoon, during inspections to assess the condition of the ship, a “leakage of hydraulic fluid“. The government of Gibraltar made it known. The authorities intervened by placing a”marine reef around the cargo to avoid pollution hazards ”