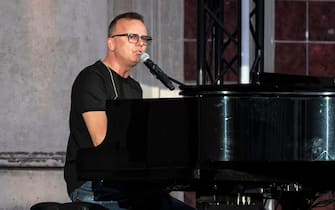 One like you – Thirty years together is the concert event of Gigi D’Alessio for the thirty-year career, which will be held in the double appointment of Friday 17th and Saturday 18th June in the wonderful setting of Piazza del Plebiscito in Naples which, at the lights of the Neapolitan sunset, will be even more suggestive

Not only an icon of Neapolitan neo-melodic music, his homeland, over the years Gigi D’Alessio has been able to carve out a place of increasing prominence among the most important and talented singers and songwriters of Italian music. You have now reached the finish line of the 30 years of careersince his debut in 1992, the artist has decided to give his audience a special event for this important anniversary

WATCH THE VIDEO: The 5 best songs by Gigi d’Alessio

In Piazza del Plebiscito to celebrate 30 years of Gigi D’Alessio’s career, the son of the singer-songwriter could only be missing LDAacronym for Luca D’Alessiowho became famous during the last television season for his participation as a singer in the talent show Friends of Maria De Filippi

WATCH THE VIDEO: LDA, 5 curiosities about the singer

The great music of Uno come te – Thirty years together cannot ignore the presence of one of the most loved Italian singers as well as a long-time friend of the Neapolitan singer-songwriter. We are talking about Salento Alessandra Amoroso

Gigi D’Alessio in concert in Naples, in Piazza del Plebiscito: what to know

The best concerts of June 2022

One like you – Thirty years together, however, will also be the unique opportunity to savor the past, present and, why not, the future of Italian music where, in the presence of emerging artists on the Neapolitan and Italian scene in general, the art of great local songwriters and performers. An example of this is the presence of Fiorella Mannoia

For the same reason, and with a great desire to pay homage to Gigi D’Alessio, he chose to be there at One like you – Thirty years, even Eros Ramazzotti

As many will know, for years Gigi D’Alessio has been at the center of a project and numerous collaborations aimed at highlighting the best of emerging Neapolitan music, made up of very young artists with great talent. Many of them will therefore also be on the stage of Uno come te – Thirty years together, on the evenings of Friday 17 and Saturday 18 June. Some names? The hitmakers Luchè And Geolier

A Uno come te – Thirty years together in the Neapolitan Piazza del Plebiscito, to celebrate together with his friend and colleague Gigi D’Alessio, there will also be the Neapolitan rapper and singer-songwriter Clementine

In the tribute in music to Gigi D’Alessio’s long career, scheduled in Naples on 17 and 18 June, with also a live television broadcast, there could not but be the great names of Neapolitan neomelodic music, of which D ‘Alessio has become a spokesperson. To Uno come te – Thirty years together the musician and songwriter Francesco Merola, Mirage Rosary, Franco Ricciardi And Ivan Granatino now strong in radio and streaming with success Naples Cuba next to Ivana Spagna. With them also the DJ Massimo Alberti

On the stage of Piazza del Plebiscito, Gigi D’Alessio will give the audience exciting live performances accompanied by aexceptional orchestra directed for the occasion from Master Adriano Pennino

To Uno like you – Thirty years together also the conductor Amadeusaccompanied by other greats of Italian television and show business such as Fiorello, Vanessa Incontradathe comedian and fellow countryman of D’Alessio Alessandro Siani, Mara Venierthe radio host and speaker Andrea Delogubut also Stefano De Martino

To conclude, the actor will not fail to pay homage to the beautiful career of Gigi D’Alessio on the stage of Piazza del Plebiscito in Naples. Maurizio Casagrande And Vincenzo Salemme