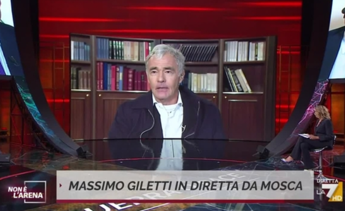 Maximum Giletti conducts ‘Non è l’Arena’ from Moscow and, after the long interview with Maria Zakharovaspokesman for the Russian Foreign Ministry, here comes the illness live. The conductor, in fact, was absent for about 15 minutes, then returning to the connection and talking about what could have been “a drop in sugar”. In the meantime, always in yesterday’s eventful putata, also on the air the wrath of Alessandro Sallusti who – after an hour of interview with Zakharova – blurted out: “I no longer want to participate in this drama …”.


THE INTERVIEW WITH ZAKHAROVA – “I have the impression that you arrived on Earth a week ago.” This is how Zakharova addresses Giletti in the very long interview on the war with Ukraine. “Italy, your country which is a member of NATO, entered the territory of Iraq and entered Baghdad destroying and killing. Are you telling me that you cannot enter other countries with weapons?” He says. Zakharova in one passage.

“I have said several times that the West has made mistakes and for this I have been criticized. I ask you to leave historical speeches, we are in 2022: I have seen a war made up of rape, murder, killed children. You who have an important history in diplomacy he must make sure that the word counts. You cannot continue waging war. I know the story, I am not from Mars “, says Giletti.

“It is you who do not look back and do not look at your history – Zakharova replies -. Without acknowledging your past mistakes you cannot talk about the future. I ask you to analyze all the steps taken by the West: the only thing that the United States wants to achieve is the isolation and destruction of Russia. Do you not understand that with the interruption of relations between Russia and Europe “, the United States” creates harm to you. When will you understand? “.

THE ILLNESS – After the interview, Giletti therefore felt ill. “It was very cold, perhaps a drop in sugar,” explained the reporter who returned to the air after an absence of about a quarter of an hour. “Massimo Giletti had a faint, we hope to hear soon”, Myrta Merlino warned from Rome, alarmed by the conditions of his colleague. “Oh my God, help Massimo”, Merlin’s words. Shortly after, reassuring news: “I see that Massimo is standing, now we reconnect with him, as soon as he is in a position to speak”.

THE WRATH OF SALLUSTI: “SCENEGGIATA” – In yesterday’s eventful episode, therefore, the anger of Alessandro Sallusti also aired who, stigmatizing the words of Maria Zakharova, attacked: “I no longer want to participate in this drama, thank you”. “I thought you went to Moscow to talk to the Russian people. I am faced with total enslavement in the face of the worst propaganda that there can be. The Kremlin is a shit palace, communism committed the biggest crimes there,” says Sallusti turning to Giletti. “I give up the agreed fee but I’m not going to give a fig leaf to those two balls you have there, I’m leaving”, he adds, referring to two Russian guests next to Giletti, including the well-known TV anchor Vladimir Soloviev .

Mine on the Kremlin pic.twitter.com/bfC11iUIvl