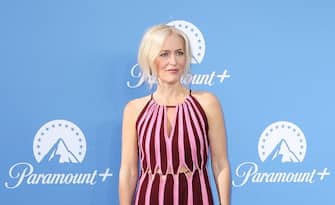 Winner (among other things) of two Emmy and two Golden Globe, Gillian Anderson turns 54 this August 9th. As a young girl, she lived in many places and dreamed of becoming a biologist. Today she is recognized as one of the first actresses to have successfully alternated between television, cinema and theater. Here are the most iconic characters of her.

Gillian Anderson takes The X-Files to the Walk of Fame

Dana Scully, the skeptical FBI agent ready to approach the supernatural with the scientific rationality of a doctor in X-Files, was the first major role for Gillian Anderson. The same actress then told that she, in order to pass the audition, she had pretended to be three years older than those actually written on the identity card. A lie that gave us one of the symbolic characters in the history of the small screen.

The goddess Media is one of the protagonists of the series American Gods by which is easier to remember. The god of mass media, able to manipulate opinions and take the form of pop icons like David Bowie or Marylin, is certainly well embodied by a multifaceted actress like Anderson.

American Gods 4 will not be there, canceled the series

The house of joy is the 2000 film based on the famous novel of the same name by Edith Wharton. In the film, Gillian plays the protagonist Lily Bart who gives up her high standard of living to try to be happy.

When you compare yourself with a personality that has remained in the collective imagination like Margaret Thatcher, the risk of getting burned is high. Perhaps this is why the iron lady was interpreted only by top-level actresses such as Maryl Streep at the cinema and Gillian Anderson on TV (in the series The Crown).

The Crown, the looks of Margaret Thatcher and Gillian Anderson

Gillian Anderson plays roles in iconic TV series well. Another proof of this assumption is surely the role of the mother of the teenage protagonist Otis in Sex Education.

Imagine the Dana Scully of X-Files teleported to Belfast and set to investigate a series of murders of women in the city. Here, now you should have an idea of ​​who the character of Inspector Gibson played by Gillian in the series is The Fall.

Gillian Anderson is also ne Princess Mononoke even if you can’t see it. In fact, in America the wolf-goddess Moro has the voice of the actress, always at ease with her when she has to represent “tough” characters.

Anderson is almost more recognizable in the previous film than in the award-winning mini-series based on Dickens’ masterpiece Big hopes. In this BBC operation, Gillian disappears as Miss Havisham, a wealthy middle-aged lady who lives in a ruined mansion with her daughter.

It’s true The last king of Scotland it earned an Oscar for Forrest Whitaker but, in this film set in Uganda tyrannized by the dictator Idi Amin Dada, there is also Gillian Anderson in the role of the wife of a doctor who does not let herself be lusted by her husband’s young colleague.

In the sequel to the 2003 film, Johnny English – The rebirththe funny secret agent played by Mr. Bean / Rowan Atkinson has a new not so malleable boss: it’s Pamela Thornton, aka “Pegasus”, also played by our Gillian.

Bedelia Du Maurier, with that surname stolen from the writer who repeatedly inspired Hitchcock, cannot be a trivial character in Gillian Anderson’s career. She the actress impersonated the psychologist in three seasons of the homonymous series dedicated to Hannibal.