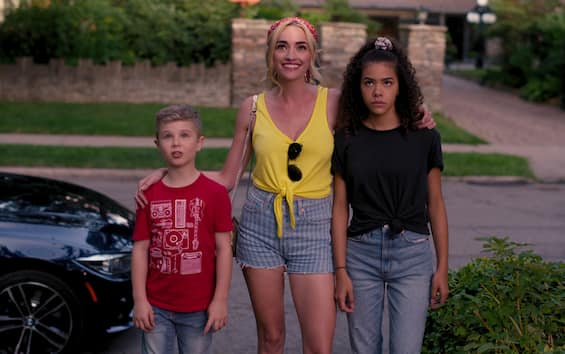 When we left them one was angry and was fleeing on a motorbike, the other was happy and was celebrating the re-election of the mayor. Now we are ready to find out what will happen and how the relationship between mother and daughter will evolve after some secrets resurface from the past. Today, Thursday 5 January, the second season of Ginny & Georgia.

Ginny & Georgia is an American TV series created by Sarah Lampert. It recounts the adventures of Georgia, a single mom, and her children Virginia (called Ginny) and Austin: both have the names of the places where they were born. After yet another move, the family begins a new life in another city. The first season, consisting of ten episodes, was released in 2021. It obtained an excellent response from the public: in the first four weeks it recorded over 52 million streams. It was therefore confirmed for a second season: this too, due out today January 5, is made up of ten episodes. It has been compared to by many A mum for a friend, cult of the 2000s. The series deals with many topical issues, alternating dramatic moments with lighter moments: from bullying to self-harm, from racism (Ginny is of mixed ethnicity) to domestic violence.

Georgia is played by Brianne Howey, who we have already seen in the series The Exorcist, The Passage and Doll face. Antonia Gentry, in her first important role, plays the role of Ginny. Also in the cast is Scott Porter, who in Hart of Dixie played George Tucker and here is Mayor Paul Randolph; Raymond Ablack, already seen in Degrassi: Next Class, narcos, maid, who is Joe, a restaurant owner; Jennifer Robertson, actress of Schitt’s Creek who lends her face to the neighbor Ellen Baker; Felix Mallard, already seen in Neighbours who is now teenager Marcus Baker; Sara Waisglass, present in Degrassi: Next Class, who is Maxine Baker, Ginny’s best friend; little Diesel La Torraca, as Georgia’s other son and Ginny’s half-brother.

The plot of the first season

In the first season we meet Georgia, a charming and energetic thirty-year-old mother, and her daughter Ginny, a brilliant and a little awkward 15-year-old. They have a very strong relationship, albeit conflicted and full of secrets. Sometimes the roles are reversed, with Ginny looking more mature and wiser than her mother. Both hide insecurities and fragility. Also with them is Austin, a 9-year-old boy Georgia had from a different man than Ginny’s father. After the death of Georgia’s last companion in a mysterious accident and several moves, the family decides to try to settle down in Wellsbury, a quiet New England town. Georgia wants to give her children something they’ve never had: a normal life. Ginny starts attending a prestigious school, making new friends and facing her first heart problems. Georgia, meanwhile, grows close to both Joe, owner of the Blue Farm Cafe restaurant, and Mayor Paul Randolph. With the mayor she begins a relationship that becomes more and more serious. Soon, however, Georgia’s mysterious past resurfaces and she threatens to turn the life of the family upside down.

We know little about Georgia’s past at first. During the episodes, through flashbacks, we discover pieces. Such as her escape from her abusive stepfather, her meeting with Ginny’s father, the birth of the girl at 15, the first time she saw Joe. In the last episode of the first season, titled Worst betrayal since Jordyn and Kyle, cheating and hidden truths come to light. Georgia, sure that she has closed the accounts with the past, seems one step away from getting what she wants: a quiet life with her children and future husband Paul Randolph, who has just been re-elected mayor. On the other hand, Ginny watches her world crumble. Her friends stop talking to her after discovering that she was having a secret affair with her best friend Maxine’s twin brother Marcus while she was dating Hunter. Not only that: her 15-year-old discovers that her mother has told her many lies in recent years and has committed crimes, also to protect her. In fact, she understands that Georgia may have killed her ex-husband after discovering that he was molesting her daughter. A detective then reveals that her mother may also be responsible for the death of another companion. How does Ginny react? As Georgia has done to her all her life: by burning evidence of her – a poisonous plant – and fleeing the city on a motorcycle with her brother.

What we know about the second season

The second season of Ginny & Georgia picks up where the first left off. We find Ginny and her brother Austin away from her mother: they went to Zion, the girl’s father. Georgia, meanwhile, is still in Wellsbury, she takes comfort in Paul and has her own wedding to plan. After a period of separation, Ginny returns to her mother to reconnect with her. What made her change her mind? How will she deal with Georgia’s lies? The girl also returns to school: after deciding to make the relationship with Marcus official, will she try to make peace with her friends? In the city then comes Gil, Georgia’s ex-boyfriend whom Austin calls dad (he is played by Aaron Ashmore, whom we have already seen, among other things, in Smallville and Locke & Key). Once again, Georgia’s past will upset the new balance.