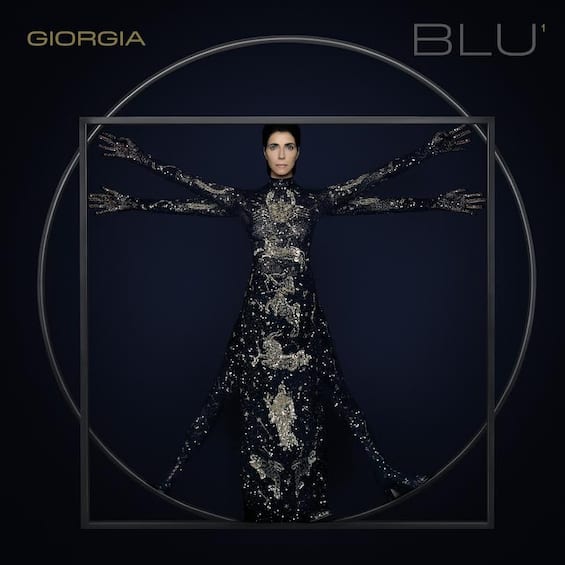 Seven years after Black gold (Double Platinum certified), Georgia returns with “BLU1”, the new album of unreleased tracks produced by Big Fish (Microphonica / Columbia Records / Sony Music), to be released on February 17th. The first piece of a new creative path of the artist, Blue¹ will be available in standard CD, standard VINYL, autographed CD and Blue Vinyl versions, as well as digitally. While from today, January 13, both the physical and digital versions are already available in pre-oder at the following link https://columbia.lnk.to/BLU.

The idea for the cover comes from the visionary mind of Maria Grazia Chiuri who, inspired by the famous image of the Vitruvian man by Leonardo da Vinci, places a woman in search of a common center between heaven and earth, with a specially designed dress that reproduces the constellations. The concept was then made concrete by the film shot by Brigitte Niedermair. Blue¹ contains nine songs full of the most earthly emotions but also of the suspended magic of the cosmos, and sees among its authors, in addition to Giorgia herself, also Elisa, Francesca Michielin, Mahmood, Dardust, Jake La Furia, Ghemon, Sissi, Jacopo Ettorre, Alberto Bianco and Francesco Roccati: “Blu¹ is a deep look through emotions, sometimes tyrannical, through fears that I hope lead to conscience. And it is the journey from reason towards the mysterious lightness of the sky that always has an answer, just raise the face”, comments Giorgia.

The album will also contain Bad wordsthe song with which Giorgia will return this year to the stage of the Ariston Theater in Sanremo, e Normalthe single forerunner of this new art project, written by Mahmood and Dardust (https://Columbia.lnk.to/Normale).