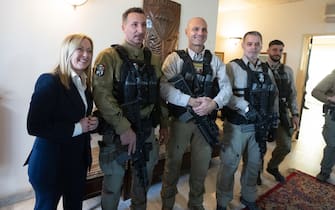 Prime Minister Giorgia Meloni arrived in Baghdad, Iraq, where this morning she was welcomed by Prime Minister Mohammed Shia Al Sudani with whom she had an interview at the Government Palace

All the news live on the Meloni government

Meloni met the Italian ambassador Maurizio Greganti in the Iraqi capital and at the Union 3 military base, headquarters of the NATO Mission Commands (NMI) and the Anti-Daesh Coalition (OIR), the Commander of the Mission General D. Giovanni Maria Iannucci, a representation of Italian military present and the personnel of the Italian military contingent in Iraq

“I am really very pleased to be here in Iraq today in what represents my first bilateral mission outside Europe. Iraq is a friendly country which has once again shown its belief in democracy with the recent formation of the government”, said Meloni on the sidelines of the conversation with the prime minister of the Republic of Iraq, Mohammed Shia al-Sudani

“Iraq – Meloni underlined – is a nation that has taken important steps forward in terms of security and political stability and which, from our point of view, can look to reconstruction with optimism. Italy has always been at the forefront of the support Iraq at 360 degrees. We also do it within the framework of the Anti-Daesh Coalition: because there can be no stability and prosperity in the Middle East without a strong Iraq. Italy has always been at Iraq’s side in its rebirth”

“Our bilateral relations are intense and have deep roots. We collaborate on energy, industrial and cultural points of view. We must now do more and strengthen our partnership. 2023 must be the turning point for our bilateral relations”, he said concluded the Prime Minister

Meloni also expressed his appreciation for the decision of the government of the Republic of Iraq to establish December 25 as a national holiday, so as to allow all those who wish to be able to celebrate Christmas

“I consider it – said Meloni – an important sign of great respect for religious freedom and respect for the Christians present in the country. I sincerely thank the Prime Minister of the Republic of Iraq, Mohammed Shia al-Sudani for this choice”