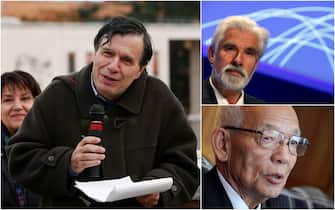 Giorgio Parisitogether with the Japanese meteorologist and climatologist Syukuro Manabe and the German oceanographer and climate modeler Klaus Hasselmann, was the winner of the Nobel Prize in Physics 2021

The story of the award ceremony

Parisi has also become a starting point for one of the traces of the written test at the Maturity in 2022: students were asked to elaborate on the concepts on climate change exposed by the physicist during a speech at the Chamber of Deputies. Humanity will have to make “essential choices”, he said, stressing the need for urgent political intervention

Maturity, the traces of the first test: there are Pascoli, Segre, Parisi and Verga

Parisi’s research that won him the Nobel prize concerned “the discovery of the interaction between disorder and fluctuations in physical systems from the atomic to the planetary scale”. Those of Manabe and Hasselmann helped define “the physical modeling of the Earth’s climate, quantifying variability and reliably predicting global warming”

All the Italian Nobel Prize winners

Born in Rome in 1948, Parisi graduated in Physics at the La Sapienza University of Rome in 1970. He began his career as a researcher at the National Research Council (Cnr) and then at the Frascati National Laboratories of the National Institute of Nuclear Physics ( Infn). He collaborates with Columbia University, with the Institut des hautes Études Scientifiques and with the Ecole Normale Superieure de Paris. Professor emeritus at La Sapienza since 1992, he was also president of the National Academy of the Lincei from 2018 to 2021

President Mattarella received an honorary degree from the University of Parma

“I’m happy. I didn’t really expect it ”, the professor admitted in connection with Stockholm,“ but I knew I had some chances and so I kept the phone close to me ”. The Nobel Prize adds to a long list of honors for his work. In 1992 he received the Boltzmann medal, in 1999 the Dirac medal, seven years later the Galileo prize, then the Max Planck medal and the Wolf prize for physics

Here are the winners of the Nobel Prize for Medicine 2021

The physicist dedicated the Nobel Prize to Nicola Cabibbo: “He was my teacher. He passed on knowledge to me, but also love for science”. Cabibbo is best known for having introduced a parameter into particle physics – later renamed the Cabibbo angle – which allows us to understand how a set of particles can become a single entity

In the darkest months of the emergency Covid Parisi has repeatedly intervened in the scientific debate to encourage a correct use of the data of the pandemic. In October 2020 he wrote a letter to the President of the Republic Sergio Mattarella together with 100 other scientists from all over the world asking for more incisive security measures to prevent infections

During a lectio magistralis held on the occasion of the inauguration of the academic year of the Sapienza University of Rome, Parisi warned of “strong anti-scientific tendencies” that characterize the “current society”

“We have a duty to foster a culture based on facts and prevent one from spreading pseudoscience: it is not enough to understand, to find the way, but we also need to be able to communicate “in order” to be convincing in a lasting way “, said Parisi

Among the reasons behind popular mistrust in science, Parisi said, in addition to “bad popularizers”, there would be “a certain arrogance of scientists who present science as absolute wisdom, compared to other questionable knowledge, even when in reality it is not. it is at all “. Arrogance that asks “unconditional assent based on trust in the experts “