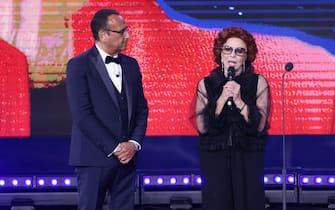 Giovanna Ralli, born in Rome in 1935, received the David di Donatello for Lifetime Achievement during the award ceremony for the 2022 edition held in Cinecittà. Here she is on stage

WATCH THE VIDEO: Who is Giovanna Ralli

In her speech of thanks, Giovanna Ralli mentioned some of the great artists with whom she has worked over time, reserving a special place for Alberto Sordi with whom there was esteem and friendship

The great interpreter occupies her place in Italian cinema and today she is often seen as a special guest of television broadcasts and sector events. Here she is at the Rome Film Fest in 2018

In 2015, at the Taormina Film Festival where she received a lifetime achievement award, Giovanna Ralli announced her retirement from the stage

David di Donatello 2022, the most beautiful dresses and looks on the red carpet. PHOTO

Giovanna Ralli began acting very early with Vittorio De Sica and in her career she was on the set with the greatest directors of her time including Roberto Rossellini, Ettore Scola, Carmine Gallone, Sergio Corbucci, Luciano Emmer, Luigi Magni. Here it is in 1955

To Giovanna Ralli the David for Lifetime Achievement

There are many interpretations to be reviewed by Giovanna Ralli, here in 1960 on the set with Roberto Rossellini during the filming of It was night in Romeof which he is the protagonist

David di Donatello 2022, where to see the award-winning films. PHOTO

In Giovanna Ralli’s long career there have been many participations in American productions in which she took part between the sixties and the seventies. In this 1966 photo the actress is with Jack Lemmon who, she tells her, in Hollywood she was a neighbor of hers.

1955. Giovanna Ralli poses with Alberto Sordi during the filming of A hero of our times by Mario Monicelli. La Ralli, like Sordi, is a representative of Romanism in the cinema. The actress was born in the Testaccio neighborhood

In 1964 Giovanna Ralli interprets The escape for which he wins his first Silver Ribbon. She will win it again for Best Supporting Actress in 1975 for We had loved each other so much by Ettore Scola

Giovanna Ralli has had many famous loves, among which a love story with the English actor Micheal Caine stands out. She married the lawyer Ettore Boschi in 1977 with whom she lived for almost forty years until his death. She the actress has no children