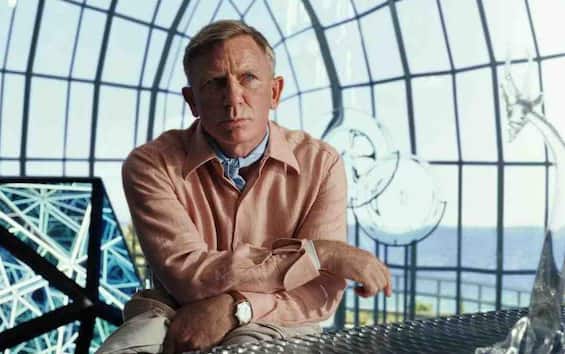 Lucky Red wanted to offer a treat to the Italian public by releasing a new teaser trailer for the highly anticipated Glass Onion-Knives Outthe second chapter of Benoît Blanc’s investigative adventures.
The latter is played by Daniel Craig, who after the success of the founder of the franchise, Murder Dinner – Knives Out, come back for a new investigation. The detective is in Greece, where he tries to unravel the tangled skein of a complicated mystery, obviously seasoned with extravagant suspects.

Tech tycoon Miles Bron (Edward Norton) has invited loved ones to his own private island. Here the tycoon’s family and friends will find a corpse, so Blanc will have to get to work to find out who committed this crime.
Glass Onion – Knives Out it will be released in cinemas in Italy on November 23 and will remain in theaters until December 29, after which starting from December 23 it will land on Netflix (also visible on Sky Q and via the app on Now Smart Stick).

You can watch the new Italian teaser trailer of the film Glass Onion – Knives Out in the video you find at the top of this article.

Glass Onion – Knives Out is the direct sequel to the previous chapter. It develops as an Agatha Christie-style deductive mystery. As in the works of the great English novelist, also in this case the main figure is that of an investigator as eccentric as he is brilliant. And once again the detective will be grappling with an unexpected and singular case.

The cast of the sequel

No less is the cast of this new film, once again directed by Rian Johnson. Also for this second test of his, the director managed to gather a parade of stars.
Janelle Monáe, Kathryn Hahn, Leslie Odom Jr., Jessica Henwick, Madelyn Cline, Kate Hudson and Dave Bautista are some of the names featured on the set. In addition, this film has some illustrious cameos, including that of the late Angela Lansbury, the legendary “Lady in Yellow” who recently passed away.

You can watch the new Italian teaser trailer of the film Glass Onion – Knives Out in the video you find at the top of this article.