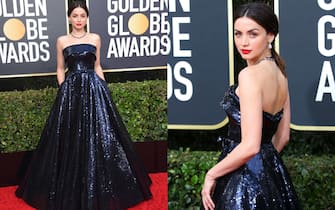 In anticipation of the eighty edition of the Golden Globes, let’s retrace the best looks of the stars in the last five editions. This selection is opened by Ana De Armas, very elegant in her Ralph & Russo midnight blue dress. The star who was nominated for Best Actress in a Comedy at the 2019 Globes is nominated this year with Blonde

In 2020 Scarlett Johansson wore a dress made for her by Vera Wang. Her corset dress with a plunging neckline ushered in a trend of the season: the red carpet-matching gown. With her, her husband Colin Jost

Golden Globe 2020: the best looks of the guests on the red carpet. PHOTO0

Lady Gaga in 2019, a season that also saw her as a protagonist in the cinematographic field, became the interpreter of Maison Valentino haute couture with a fairytale princess powder blue look which on that occasion wanted to be a tribute to Judy Garland, diva who preceded her in the lead role in A Star is Born. The pop star stole the show with toned hair and a five million dollar Tiffany & Co. necklace

Another fairytale look, the one worn by Emmy Rossum at the 2019 Golden Globes. The light peony pink dress has a sophisticated drape on the top entirely handmade by Maison Monique Lhuillier

Golden Globe, between the presenters Tarantino and Ana de Armas

In 2018, the year in which the stars supported the movement Time’s Up expressing their position towards the system also with the looks, all black as a sign of protest, Penelope Cruz stood out for her elegance and femininity. The actress wore a Ralph & Russo embroidered lace dress with sparkles and tail. To complete the look, the Atelier Swarovski jewels

A diva look also for Angelina Jolie who, again in the Golden Globes 2018 edition, chose an Atelier Versace dress with a front drape and a cape top with sleeves decorated with a massive border of feathers. The star, superb and austere, was among the most photographed

Golden Globe 2023: all the nominations

Jessica Chastain, who also took the stage for a moment at the 2017 Golden Globes with her colleague Eddie Redmayne, had already exhibited her Prada dress on the entrance red carpet. Already at the time, the actress used the styling of Elizabeth Stewart

Golden Globe nominations 2023, the titles to watch on Sky

Amber Heard at the 2019 Golden Globes exhibited one of the most interesting looks. The dress, a creation by Monique Lhuillier, is remarkable, but also the beauty look, with a fluffy and wavy hairstyle, and the jewels, among which the mini earrings stand out for the many ear piercings

Lupita Nyong’o at the 2019 Golden Globes unleashed an unprecedented cobalt blue dress to which she combined eye makeup. For that evening, the actress chose Calvin Klein and her dress, entirely embroidered with beaded fringes, was made to measure for her

Ryan Reynolds and Blake Lively are one of the most solid and best dressed couples in Hollywood. At the 2018 Golden Globes they too adhered to the black dress code adopted by most of those present. The actress chose Atelier Versace, the brand she prefers for important occasions

Lace and carvings, among the major trends of that season. Emily Blunt at the 2018 Golden Globes promoted the best of her country’s fashion by bringing an Alexander McQueen creation to the red carpet

In 2019 Irina Shayk and Bradley Cooper still appeared as a couple on the red carpet and at the Golden Globes of that year they were among the most photographed. The actor and director wore a white Gucci tuxedo while the model chose an Atelier Versace gold sequin-embroidered dress while showing off her new hairdo

Ruth Negga at the 2017 Golden Globes chose Louis Vuitton and the dress, futuristic-inspired with a hint of warrior style, bears the unmistakable signature of Nicolas Ghesquière

Romantic and chic, Michelle Williams’ dress at the 2017 Golden Globes expressed a fresh and contemporary femininity. The reference designer for that occasion was Louis Vuitton

Candidate for her interpretation of Jackie Kennedy, Natalie Portman in 2017 kept the style of Jackie O for her appearance on the red carpet. The dress, which the actress wore with her baby bump, was Prada, the (vintage) jewels Tiffany & Co., styled by Kate Young

It wasn’t just women who chose black for the 2018 Globes. For that event, Chris Hemsworth backed up his colleagues with an Etro look. The actor showed up on the carpet without a bow tie but with the Time’s Up slip in his jacket pocket

Among the candidates of the 2018 edition also Mary J. Blige. The star of music and the big screen brought Alberta Ferretti’s Made in Italy glamor to that year’s Globes

With her look that perfectly blended the elements of masculine and feminine elegance, Julia Roberts conquered fashion fans at the 2019 Golden Globes. Her dress was designed by Stella McCartney while her jewelry was Chopard

All-over liquid-effect sequin dress for Phoebe Waller-Bridge who dared to wear a very low-necked dress by Galvan at the 2019 Golden Globes. On that occasion, the actress and author amazed everyone with a completely unusual look for her style standards

Claire Foy never misses a shot, on set as on the red carpet, and at the 2019 Golden Globes she was more beautiful than ever. Her retro look, inspired by the Twenties also in terms of beauty, was Miu Miu