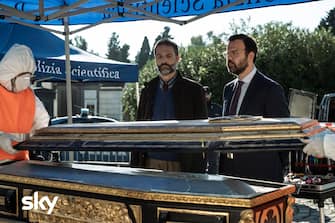 Determined to permanently frame Genny, the magistrate Ruggieri has Donna Imma’s body exhumed. And in his coffin he finds that of Don Pietro Savastano

Genny returned from Riga, where he met Ciro and had him kidnapped and locked in a cell by the Russians

‘O Maestrale and Donna Luciana welcome Genny. The former is unsure of the boss’s strategy, but the latter continues to think that being by his side is best for them.

7 reasons to watch Gomorrah if you haven’t already

The police continue with a series of raids in the market squares of North Naples. During one of these we get to know the character of ‘O Munaciello, who volunteers to go and talk to the Levant and act as an ambassador of the increasingly widespread discontent towards their management

Genny tries to exploit the discontent towards the Levante, leaves his bunker and goes to talk to the bosses of the North Naples drugstores, of which he intends to regain control

Gomorrah – Final season, the 30 most famous phrases of the whole series

Many would like to go over to Genny’s side, almost everyone. But when he leaves, ‘O Munaciello takes the floor to defend the Levante again and attack Savastano

Genny meets Igor, a broker, to get information on the drug shipment destined for the Levantis, which he intends to steal

During the meeting, Saro and Francesco offer him the hand of Grazia, their sister, to seal the alliance between the two families

With Igor’s information, Genny discovers that ‘O Galantommo, the boss of a small town on the slopes of Vesuvius, is in charge of the drug load. She meets him and proposes to him to betray the Levant and go to his side

Gomorra – Final season, Ciro and Genny on the cover of Rolling Stone

‘O Galantommo, however, is a man of his word. She refuses Genny’s offer first and then doesn’t even bow to his threats. To which he replies with contempt by urinating in front of him. Genny still manages to steal the cargo

Gomorrah – Final season, the cast of the series. PHOTO

Azzurra goes to the prosecutor’s office to speak with the magistrate Ruggieri, to whom she says that on February 24, the day of Don Pietro’s death according to the confession with which Patrizia had accused Gennaro of the murder of her father, her husband was in the clinic with her to attend the birth of their firstborn

Genny goes to visit Azzurra and the two have a confrontation

Gomorra – Final season, the special with the artistic and technical cast. VIDEO

Genny would like to return with her and Pietro, but he does not want to give up control of Secondigliano. Azzurra does not want to go back to living a life of clandestinity and illegality and tells Gennaro that he has become just like Don Pietro

At the end of the episode, a bus arrives in Naples. From this comes Ciro, who has returned to the city

Genny continues in his recruitment work: he wants to get rid of the Levant and manages to gather around him almost all the squares of North Naples. Only ‘O Munaciello seems to remain faithful to the Levant

The Levants suspect that ‘O Galantommo has betrayed them and order him to remedy the situation. ‘O Galantommo therefore decides to prove his loyalty by having his assassin killed’ O cchiù bell ‘, who had expressed his will to go over to Genny’s side

Genny understands that to get the better of the Levante he has to bring ‘O Munaciello to his side. He then goes to the kennel to intercept his brother. The latter offers to be his spokesperson to convince ‘O Munaciello, but Genny replies: “You are not going anywhere tonight”

Enzo, increasingly lonely and gloomy, receives an embassy from a man who knows what happened on the boat on which he saw Genny shoot Ciro. Enzo suspects it is Genny himself who wants it, but later discovers that it is Ciro, who is not dead

The Levantis offer a banquet to celebrate the union between Grazia and ‘O Munaciello. At one point, however, the latter asks Grazia to accompany him out, convinces her to get in the car with him and together they leave the party. As they leave, they see a paranza for the family enter: a massacre takes place inside the room

Genny got rid of the Levante and feels stronger than ever. So he goes to visit the house he intends to buy to stay with Azzurra and Pietro. Here he meets’ O Maestrale and Donna Luciana, who say they are worried about seeing him get so far away from them. To be completely free, in fact, one thing is still missing: one must kill ‘O Galantommo

Azzurra receives a package at home. This is a gift from Genny: inside an ingot-shaped box with his name on it are car keys and a cube-shaped keychain with their initials: the G, the A, and the P Pietro’s

Ciro reunites his group, ready to fight back

Genny brings together a group of 10 Neapolitan entrepreneurs: he offers 1 million each to enter their companies with a minority share, so as to be able to launder dirty money. Entrepreneurs accept

‘O Galantommo was killed, his wife Nunzia mourns his death and meditates revenge: on Azzurra and Pietro

Azzurra, who has refused Genny’s gifts, goes to get Pietro from the pool. Not finding him, he panics and starts looking for him everywhere screaming his name. The child is behind one of the windows that delimit the tub area, waiting for her, holding the package taken by his father for him

Ciro, Enzo and their gang kill two drug dealers from North Naples to send a message to Genny. The latter arrives at the scene of the murder and sees the two corpses hanged on a wall at the two ends of a large inscription: “The Immortal is turnat”