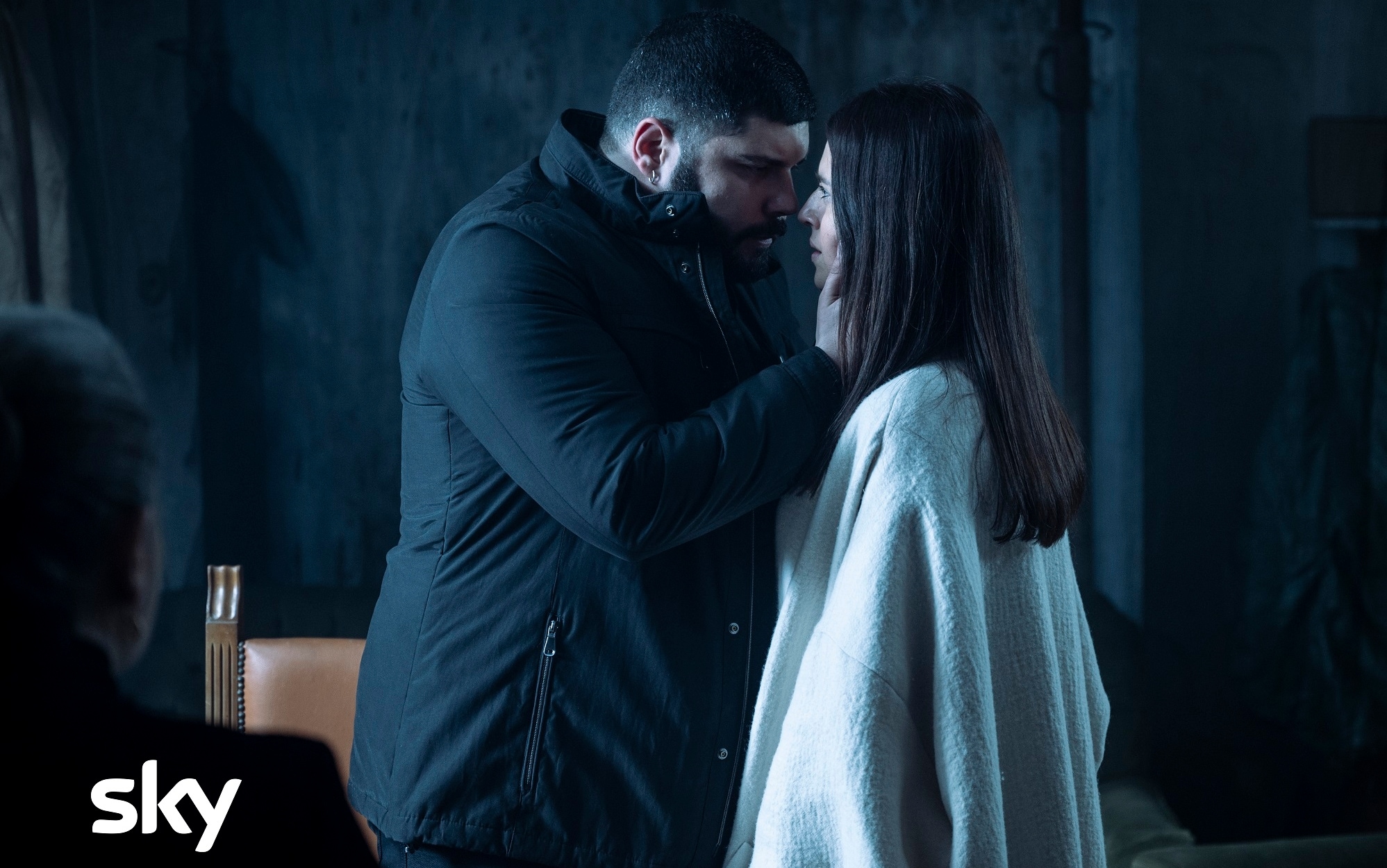 Genny and Azzurra have dinner together, ready to hug Pietro again. Genny promises a different future for his family, but while he drinks he collapses to the ground, unconscious, forcing Azzurra to call 118. The ambulance, however, does not take Genny to the hospital but to the Taliban den. Azzurra asks Ciro why he didn’t make ‘O Munaciello commit the betrayal, he replies that if he betrays you who you love it hurts more. Genny wakes up by now a prisoner, next to Ciro and Azzurra, who ask for forgiveness. Genny tells her that she did well, because Pietro comes first, then asks Ciro where the baby is. The Immortal, however, tells him that he still has to wait, first he must admit to everyone that he has been defeated.

Nunzia in front of Genny

Nunzia arrives at Ciro’s refuge to meet Gennaro. Nunzia’s monologue is hard and clear: she wants to see him die and suffer, to hear Azzurra’s tears as she feels what she has already felt. And she asks Ciro to be able to keep Azzurra with her as a guarantee of the pact made between them, the one that will lead to Genny’s death when Ciro’s plan is completed.

Ciro and Genny go to Scampia, where all the bosses and drug dealers once under Genny have been summoned. The Immortal holds a monologue in which he tells of the unfulfilled promises of the Savastano clan, promises of greatness and wealth for all, of his bond with that family, of his disappointment. The time of the Savastano family is over, he says, and then he leaves the floor to Genny, who talks about his troubled relationship with Ciro and announces the end of the Savastano era, giving Secondigliano to Ciro. Back in the car, the two talk about their past, their relationship, Genny asks that Ciro kill him, with his own hands, because only he deserves it, and asks him to promise him that Azzurra and Pietro are free forever. . Ciro replies that he has nothing to promise him and Genny, who points out that the two are innocent, remembers that his daughter, who had been killed by Don Pietro, was also innocent.

The torments of Ciro

Ciro orders Genny to stop the car at a petrol station, gets out and leaves’ O Munaciello on guard while he goes to the bathroom and vents his anger on an electric hand dryer that doesn’t work, then gets back in the car and starts Genny off again. The two follow ‘O Munaciello, who arrives at the home of a worker of the family home where Pietro is kept and, threatening him, forces them to take them to the place. Here Ciro convinces a reluctant employee to come in to take Pietro out. Impatient and worried, Genny gets out of the car and kills’ O Munaciello, then enters the structure to look for Pietro, finding him in the arms of Ciro, who lets him go to allow him to hug his father again.

Ciro telephones Nunzia to inform her that the delivery of the child has taken place, she orders her men to go to the beach to await Genny’s arrival and kill him. So she also goes out to go to the place, inviting Azzurra to go with her, the latter asks her to spare Genny promising that she will never see him again. Nunzia, however, does not change her mind about her revenge intentions. After Pietro’s delivery, Ruggieri too can hug his son again. Nunzia’s car is stopped by a police checkpoint, ‘O Galantommo’s widow and her escort are killed by Ciro’s men dressed as agents, Azzurra taken and taken to the beach to find Genny and Pietro and escape with them on a boat. Ciro accompanies them and takes out a gun, pointing it at Pietro. Genny asks him to spare his son and his wife, Ciro replies that to be equal to him he too must lose the thing he holds most dear. Azzurra also asks him to spare the child, Ciro lowers his gun and invites them to go away.

The end of everything

Meanwhile, a few meters away, a shooting rages. Good and good is shot to death, Genny pushes the boat with Azzurra and Pietro on board, tells his wife that he was right, that the only person who cannot protect her is him, then returns to the beach with Ciro to participate in the shooting and is shot to death. Taking his face in his hands, Ciro mourns the death of his friend, convinced that he was left alone on the beach. But in the dark, a shot explodes, hitting him and ending the legend of the Immortal.

The last episode of Gomorrah – Final season (EVERYTHING YOU NEED TO KNOW) opens with Genny and Azzurra’s dinner, a subdued and intimate version of the last supper, with only two participants, the man about to be betrayed and his wife. The face of Azzurra is that of a conscious and troubled Judas, totally dominated by a destiny that she did not choose and a role that was imposed on her by Ciro’s revenge plan, who wants to see his former friend defeated by the woman’s hand. who loves.

A Genny without anger

What we are facing, however, is now a Genny without anger. He does not feel it when he discovers Azzurra’s betrayal or when, in front of all the Camorra members of North Naples, power passes over Secondigliano into the hands of Ciro. He is resigned, aware of the end of his empire, focused only on the protection of Azzurra and Pietro. Thus he witnesses impassively the triumph of Cyrus and the end of his family’s dynasty, making himself ambassador.

The sense of ineluctability of Gomorrah

What is striking, as often happens, are the dialogues. And in the last episode what is probably the sentence that encompasses all the sense of is pronounced Gomorrah – The series, a sense of inevitability and failure. To say it is Genny, in front of Ciro: “We wanted to eat the world, but this world ate us”. Because the Camorra and crime are like that, they don’t discount, they don’t accept programs, they end up devouring those who think they can feed on them, killing their dreams, hopes and ambitions. And it is again to Ciro that Genny explains how he felt throughout this last series: alone, completely alone, from the moment he closed his friend in that Latvian cell, in the vain hope of finding peace.

There is always a choice

Yet, it is always men who make the choices. “There is always a choice” is a phrase that is often repeated during the last season. Ciro knows this and takes responsibility for it, deciding to put friendship in front of the desire for revenge and pride in the silence of a public bathroom in a service station. It is a difficult choice, which generates anger vented on an electric hand dryer that does not work, but it is a choice that Ciro makes fully aware.

The other dualism: Nunzia and Azzurra

The dynamics of contrast live as much in the dualism between Ciro and Genny as in that between Nunzia and Azzurra, two women who speak two different languages. Totally faithful to her husband who passed away, the first, with the thought constantly turned to her son, the second. For Nunzia there is no longer a feeling of motherhood on which to leverage to make her change her mind about Genny’s fate, when Azzurra asks her to spare him to allow Pietro to grow up with a father. There is wisdom, however, and the now achieved awareness that women like her and Azzurra shouldn’t have children.

Once again the choice to have all the action done at night seems to have a symbolic value. The music, as it happened throughout all five seasons of Gomorrah, plays a central role in the tale, and the melodic version of Nuje vulimme ‘na hope of NTO ‘e Lucariello that accompanies the journey of Azzurra and Nunzia appears particularly poignant and fitting.

The finale is a climax that closes the circle

The whole thing is preparation for a final climax that encompasses all the elements of Gomorrah, from the purest action to introspection, from feeling to drama. “The difference between you and me”, explains Ciro when he lowers the barrel of his gun and decides to spare the life of Genny and his family, is that I will never put any interest or feeling in front of friendship. Thus Ciro’s plan of revenge is fulfilled, not with an act of violence and death but with a declaration of love. GomorrahHowever, it cannot have a happy ending, not for those who have chosen to live off violence. Thus, while the motorboat with Pietro and Azzurra leaves, Genny dies shot in the shooting that rages on the beach. And Ciro, in tears after saying goodbye to his friend, convinced that he is now alone, is hit by a bullet in the dark and falls next to him, the bodies brushing against each other, united from beginning to end, until the last day, the one that sees a king collapse and the myth of the Immortal dissolve. And that perfectly closes the circle of a narrative that in the course of five seasons has never set the pace, always remaining coherent and true to itself.