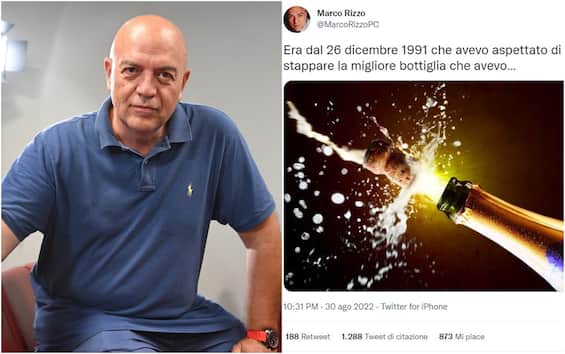 Marco Rizzo, secretary of the Communist Party, published the sentence on Twitter accompanied by the image of a bottle that has just been uncorked. He did not write names, but the reference to the Russian leader who disappeared in the past few hours became clear. Thousands of comments and criticisms. He then added: “Mine is a deliberate provocation, almost of a Dadaist type”

“It was since December 26, 1991 that I had been waiting to uncork the best bottle I had.” It is controversy for this sentence written on Twitter by Marco Rizzo, secretary of the Communist Party. Although there are no names, the reference was clear to everyone: Mikhail Gorbachev, the Russian leader who passed away yesterday 30 August. The date cited, December 26, 1991, is that on which the Supreme Soviet of the USSR – after the resignation of Gorbachev as president – formally dissolved the Soviet Union.

Under the tweet, accompanied by a photo of a freshly uncorked bottle, thousands of people immediately left comments and criticisms. In a second message, Rizzo retorted: “A Dadaist provocation and hypocrisy. There are people who die of war, hunger, injuries, vaccines. Every holy day. One of the gang of globalizers dies. Put a bottle of sparkling wine, without giving a name. All hell breaks loose. Whose? Newspapers “. The candidate for the Chamber of “sovereign and popular Italy”, furthermore, then declared to the Adnkronos: “It is clear that mine is a deliberate provocation, almost of a Dadaist type, I’m not stupid … Gorbachev is an icon of globalization, of the mainstream. He triggered the globalization process that brought us to the current situation ”.

Matteo Salvini also spoke about Rizzo’s tweet. “When death is involved, for me there is prayer and respect. I’m sorry that someone manages to find a way to make a controversy even when a person flies to the sky: I just don’t comment “, the Northern League leader told journalists in Palermo. Maurizio Acerbo, secretary of the Communist Refoundation and candidate in Abruzzo: “No comment Marco Rizzo, caricature of a ‘communist’ horror who likes the salons he frequents and guarantees him visibility on TV. One who supported the government that bombed Serbia and congratulated Prodi for joining the euro, then became no NATO no Euro for fools who take the bait. The thesis of Gorbachev’s betrayal has already been dismantled by Giulietto Chiesa who was certainly not pro-American “.