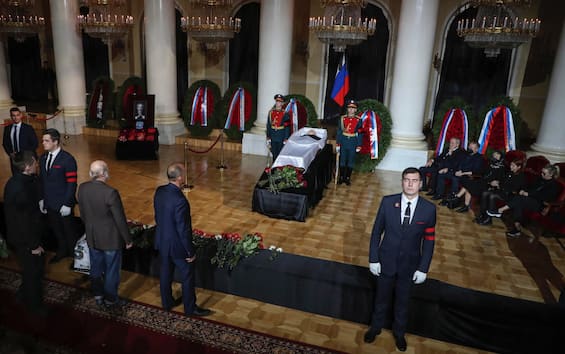 Mikhail Gorbachev’s funeral home opened at 10 am (9 am in Italy) in the historic hall of the Columns of the House of Trade Unions in Moscow: about 2 thousand people lined up for the civil commemoration for the last leader of the Soviet Union , who died on 30 August. A line that passes by the Bolshoi Theater and reaches the House of Trade Unions, where in the past the funeral was held for all Soviet leaders starting with Stalin. The farewell to Gorbachev, Russian media reports, is organized by the protocol service of the Russian presidential administration but, as announced, the presence of President Vladimir Putin is not expected. Gorbachev will be buried in the Novodevichy cemetery, next to his wife Raisa.

Medvedev at the ceremony

In line for the last farewell to Gorbachev ordinary citizens, but also well-known personalities such as one of the most famous Russian singers, Alla Pugachiova, politicians, journalists and actors. Former Russian President and Vice President of the Security Council Dmitri Medvedev also gave the USSR leader a final farewell. Russian Prime Minister Mikhail Mishustin and the government sent wreaths to the funeral parlor set up in the Hall of Columns. The Hungarian premier Viktor Orban also arrived, who in a phone call with Putin expressed condolences for Gorbachev’s disappearance, underlining “his influential role in world history”. Present some ambassadors from Western countries including the US in Russia, John Sullivan, the German Geza Andreas von Geyr, the British and the Japanese in Russia, Toyohisa Kozuki.

The burial in Novodevichy

Gorbachev will be buried at the Novodevichy cemetery, near General Aleksandr Lebed – a very popular politician in post-Soviet Russia who died in an accident in 2002 – and the first president of the Russian Federation and his great antagonist Boris Yeltsin, buried right in the center of the cemetery. in 2007 in a tomb that carved a Russian flag that moves in the wind in marble. Aristocratic necropolis of Moscow as early as the 16th century, Russian nobles were buried in Novodevichy but over time they ended up being side by side with writers (Anton Chechov and Nikolai Gogol) and musicians (the Russian Paganini, David Ojstrach and the composer Serghei Prokofiev ), engineers (Andrei Tupolev, inventor of the aircraft of the same name) and politicians (the former secretary of the Communist Party of the Soviet Union, Nikita Khrushchev) as well as wives of leaders such as Stalin’s second consort, Nadezha Allilueva. To curb the curious, especially those who flocked to the tomb of Khrushchev (father of the so-called “de-Stalinization”), from the 1970s access to the cemetery was forbidden to those who had no buried relatives. Its reopening in 1987 was one of the achievements of Gorbachev’s glasnost. Since the 1930s, Novodevichy has been considered the cemetery of the national elite, and burial on its territory is considered a public recognition of the merits of the deceased.