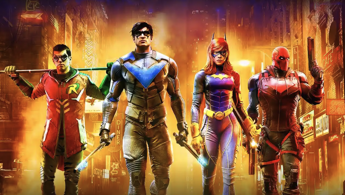 After Batman’s death, his four heirs rise to defenders of Gotham City

Batman is dead, but Gotham is not yet lost: in defense of the city there are his heirs, the knights of this title, a courageous project by WB Games Montreal who has decided to set an action game in the world of the Dark Knight without his main protagonist. Nightwing, Batgirl, Red Hood and Robin are the heroes of this game, educated and armed by Batman to continue maintaining order in Gotham, and behind their identities are Dick Grayson, Barbara Gordon, Jason Todd and Tim Drake, characterized with great attention to the original comics and immersed in a plot that explores the loss of leadership and the rebirth of the group. The story of Gotham Knights, although not very long, unfolds along the experience of four different points of view: for this reason the game offers a certain longevity despite the brevity of the main campaign, structured in a classic open world zone in which to decide a which mission to devote from time to time. The main challenge will involve famous villains from the saga, such as Harley Quinn, Mr. Freeze and Clayface, as well as the menacing Court of Owls.


In a choral game like this, a gameplay that is also very reminiscent of Arkham Knight or Spider-Man from Insomniac Games allows itself a bit of innovation with a cooperative multiplayer for two players that allows you to tackle any mission of the main game together. Even if there are no real group fighting moves, the result is a lot of fun and allows you to face the game’s level of challenge more effectively, always very high. The combat system is very similar to that of the Arkham series, although each of the four protagonists has their own style. Various skills can be added by accumulating experience, and the game also offers alternatives to face-to-face combat with different stealth sections that require you to move in the shadows. And for all fans of the Bat Man and his henchmen there is an incredible multitude of collectibles, starting with costumes that can be customized in every detail.

Gotham Knights comes out, as well as on PC, only on the latest generation consoles. And certainly the settings and characters are very rich and defined, but it is surprising to see how we have not managed to go beyond 30 frames per second of fluidity, and not always too stable. The game slows down conspicuously on more than one occasion, denouncing an optimization work far from perfect. Too bad, because artistically the work done is very good. The whole project, in general, is a very solid open-world action RPG, with fluid gameplay and great fighting, as well as a gripping storyline and characters from the Batman lore well characterized to be translated into the protagonists of a video game. To be taken seriously for co-op matches, the field in which this game differs from the competition.