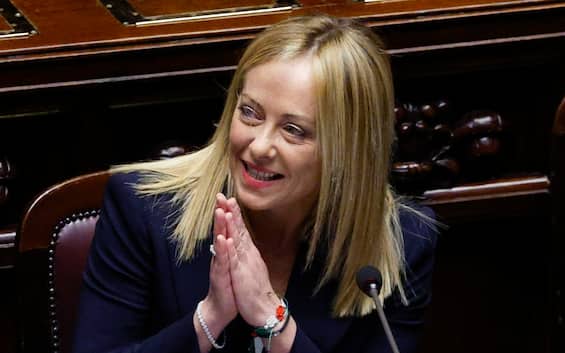 The prime minister spoke in an interview with “Corriere della Sera” about his role and the budget law: “Priorities and a vision are emerging”. “We have chosen to support the most fragile and strengthen the middle class,” he added

“I knew it would be a tough task to lead a nation like Italy in one of the most complex moments in its history”. Thus the Prime Minister Giorgia Meloni, interviewed by the director of Corriere della Sera, talks about his role: “I have never deluded myself, even if compared to Draghi I can count on a clear majority, a common program and a popular mandate. Because in our system, one person alone cannot make a difference: the team is needed. This is why I know that this government will last a long time, also because Italy has paid for the lack of stability for too long”. On the Maneuver you then stated that “priorities and a vision are emerging” and you exclude “that it will be distorted”. While regarding a meeting with French President Emmanuel Macron, Meloni reveals that she is not on the agenda “but we will certainly have to meet again”.

“Maneuver, support the most fragile and strengthen the middle class”

To the Courier the Prime Minister defines his a “modern and conservative right” and “the unreal and disastrous story that the left made during the electoral campaign on the hypothesis of a Meloni government has been widely denied, the spread is at its lowest compared to recent months and at an international level there is great attention towards Italy”. From the Maneuver, he says, “priorities and a vision emerge: economic growth and attention to work, starting with making the production system safe in the face of expensive energy”. “Some – he observes – were taken aback by the choices of a government which, it was said, would favor the rich: we chose instead to support the most fragile and strengthen the middle class”.

“Maneuver will not be overturned”

To those who accuse her on the Citizenship Income, the prime minister replies that “seeing the Democratic Party, which voted against the institution of the Income, today taking to the streets to defend it demonstrates the instrumentality of certain positions” and “I would like to ask the M5s if when they instituted they imagined it as a sort of annuity to be received from the age of 18 until retirement. If the answer is yes, I do not agree”. Meloni reminds the president of Confindustria Bonomi that “more than half of the resources we have put in place are destined for companies”. The premier excludes that the Maneuver will be overturned: “Improvement rules can certainly come, not only from the majority but also from the opposition”. Starting from the tragedy of Ischia, Meloni underlines that “there is a lot of work to do but a different cultural approach is also needed. Because every euro invested in the care of the territory is a euro invested in giving our children a safer and more protected Italy” .

The majority and the possibility of expanding it

On Action-Iv Meloni says: “Widen the majority with the support of Renzi and Calenda? I don’t think the majority needs to widen to someone because it is solid. The fact remains that if some within the opposition want to share with us some proposals there will always be our availability”. Then the Prime Minister continues: “Berlusconi I often hear him, on all the fundamental issues. Even with Salvini there is a constant and continuous relationship. Some positions that may seem dystonic don’t worry me, I’m sure and I can claim to have shared all the main choices of this government and I intend to continue to do so”.

Regarding a meeting with Macron “it is not yet on the calendar, but we will certainly have to meet again. We are people with government responsibilities who work to find solutions. It is normal for Italy and France to talk to each other”. “I’ve never had problems with France – he adds – nor do I have them today. Among other things, I had an exchange of messages with Emmanuel Macron a few days ago. Beyond the statements of some members of the French government on migrants, misunderstood by plus, our bilateral relationship continues.” For Meloni “relations with Europe are good. I had my first meeting in Brussels precisely because I wanted to give the signal of an Italy ready to collaborate, defending its national interest, as it seems to me everyone legitimately does”.

From the NGO ideological activity that helps smugglers

On NGOs, the Prime Minister says that “it’s not me, but the European agency Frontex” who says that some organizations “represent a driving factor in the flows of illegal migrants, with consequences both for arrivals and for deaths at sea. I think that a serious State cannot tolerate these phenomena of illegality”. Then Meloni adds that “the approach of some NGOs, which carry out a mainly ideological activity that has little to do with the rules of international law on the subject of sea rescue, finds a natural convergence with the interests of smugglers”. “With this management of the phenomenon, we end up helping not those who are most in need but those who have the money to pay the traffickers. The numbers should not be underestimated: in 2022 just under one hundred thousand people landed illegally in Italy, which add up to those recorded every year, for ten years now”.

“I don’t intend to withdraw the lawsuit against Saviano”

Meloni is also asked if she does not consider withdrawing the complaints against intellectuals and journalists, such as Roberto Saviano, who have attacked her on the issue of migrants. “No, I don’t think so. I presented the lawsuit when I was leader of the opposition. I did it – says the prime minister – not because Saviano had criticized me on immigration but because, in the shameful attempt to attribute responsibility to me for the death of a child at sea, he called me a ‘bastard’ on prime time TV. And when asked if that word was not far from the right to criticize, he reiterated the concept”. “I don’t understand – adds Meloni – the request to withdraw the lawsuit because now I would be prime minister: does it mean that the judiciary will have a different behavior based on my role, or that citizens are not all equal before the law? I believe – he observes – that everything will be treated with impartiality, given the separation of powers. But I also think that a certain left should not consider itself above the law”.