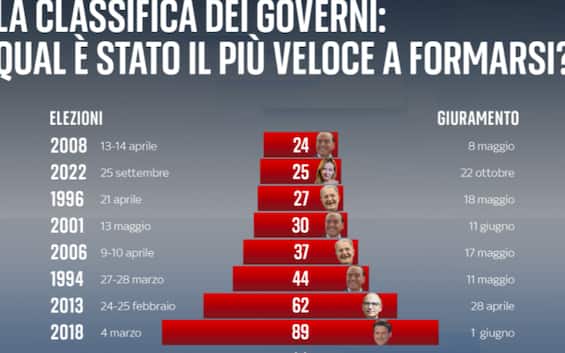 In the Second Republic he only loses the confrontation with Berlusconi II and considerably lowers the average after the long travails of Letta and Conte. Before 1992 it took about a month, but there were several exceptions

Flash consultations or huge laps? The Conte government holds the record: almost 90 days passed between the elections and the oath, while the newborn Meloni was one of the fastest with 27 days. (GOVERNO MELONI, THE SPECIAL OF SKY TG24)

In the First Republic, the average duration was about one month, with some exceptions. The Leone government in 1963 and the Cossiga government in 1979 had a particularly difficult formation. To justify such a long time, there have often been unprecedented historical-political balances, as were the birth of the center-left and the complex phase following the assassination of Aldo Moro for different reasons. . Not to mention the Amato government of 1992 which was born in the rubble of Tangentopoli. With the end of the old system, in which it was often also the internal disputes in the DC to lengthen the soup, and the advent of bipolarism, a certain speed has been preserved: from the maximum of 44 days of the first Berlusconi government in 1994 to the minimum of 24 of Berlusconi II.

Multipolarism has brought with it new complications and an extension of the transition phase between the polls and the solemn commitment ceremony at the Quirinale. Letta received the post two months after the vote. In the 62 days that passed Giorgio Napolitano was elected for his encore. Never as much as Conte who slowly nibbled the primacy of Doctor Sottile, after two rounds of consultations and two exploratory mandates, one of which with a temporal supplement. Amato had collected the beauty of 83 days of labor. With the Meloni he pushed himself on the accelerator. The coalition’s conversation with the President of the Republic Mattarella lasted only 11 minutes and Meloni accepted the post without reserve. The new Premier among the post-1992 executives is second only to Berlusconi II who took only 24 days.