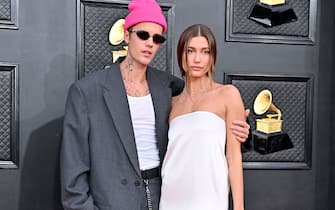 The 2022 Grammy Awards red carpet was a triumph of duo stars who indulged photographers with effusions, hugs and extravagant looks. Among the most anticipated, i Biebers, Justin and Hailey Bieber in perfect minimal style. He, oversized and with a pink Balenciaga cap; she, Saint Laurent

Very close and smiling, John Legend and Chrissy Teigen they hugged and held hands all the time in front of the photographers. For her, an extraordinary neon pink dress full of flounces and volumes Nicole + Felicia Couture

Kourtney Kardashian and Travis Barker they amused the photographers with their now classic hot kisses. Both in black, except for the contrasting overcoat Givenchy of the musician

Avril Lavigne and Mod Sun they brought a pinch of gothic-punk to the evening. On the waist belt of the singer’s dress, the title of her latest album is written

Grammy Awards 2022, the most beautiful dresses and looks on the red carpet. PHOTO

Paris Hilton after the wedding, pictures of her honeymoon

Finneas and Claudia Sulewski captured the attention of the targets with their matching Gucci satin suits. The actress, only in the jacket, is super sexy

All nominations for the 2022 Grammy Awards. PHOTOS

Carrie Underwood and Mike Fisher, hand in hand, they were splendid in their gala dresses. The award-winning singer wore a Dolce & Gabbana creation

Who is SZA, the winner of the Best Pop Duo at the Grammy Awards 2022 with Doja Cat

Again a couple who chose a coordinated look. It is about Ty Dolla $ ign and his girlfriend Zalia

Also Maren Morris and Ryan Hurda popular couple of country singers, chose dresses in the same shades for the event

The star of TikTok Addison Rae and her boyfriend, the guitarist Omad Feditogether since last year, they hugged on the entrance carpet