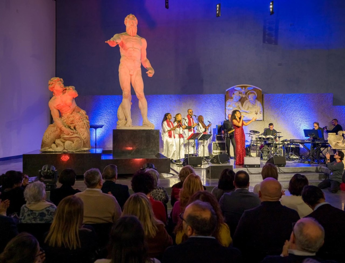 Exceptional response in terms of quality and audience for the review “Echoes of infinity”, wanted by the regional councilor for cultural heritage and Sicilian identity Elvira Amata and conceived by Antonella Ferrara, founder and president of Taobuk-Taormina International Book Festival. “An innovative formula to attract residents and tourists to historic sites through varied events and shows, capable of arousing the interest of a wider audience, beyond the usual visitors to art venues”. “From 23 to 30 December, a triumphal ride touched seven stages on both the eastern and western sides of the island: the San Lorenzo Oratory and the Church of Santa Caterina d’Alessandria in Palermo, the Lauria Castle in Castiglione di Sicilia, the Grifeo of Partanna Trapani and that of the walled city of Milazzo.The last two appointments have instead touched the Ionian coast.Over a thousand people applauded and sang with vibrant energy on the notes of the New York group The Brooklyn Gospel Harmonettes, who performed on the stage of the monumental Teatro Massimo Bellini, co-producer of the event. Equally exciting is the grand finale at the Interdisciplinary Museum of Messina”, reads a note.

Long live the satisfaction of Elvira Amata: “I would like to thank – she underlined – the team that contributed to the success of this first edition of “Echoes of infinity”, starting with Antonella Ferrara, founder and president of Taobuk, who worked on the project and its conception. And I am equally grateful for the fundamental contribution to the Superintendent of Cultural Heritage Mirella Vinci, to the director of MuMe Orazio Micali, to Valeria Lo Turco and to the officials of my department, and those of the Superintendency. Immediately after my inauguration, in just two weeks, we managed to organize a unique review of its kind. A multicultural journey to promote magical places that are part of the immense Sicilian heritage. I am convinced that with this type of initiative it is possible to widen the audience of those who participate in theatrical, musical and literary events, because culture must be circular and transversal. I am also particularly happy that the exhibition has also included my city and the prestigious setting of the MuMe”.

And in the Città dello Strait the spectators reached the room dominated by two masterpieces by the Florentine sculptor and architect Fra’ Giovanni Angelo Montorsoli, the Neptune and the Scilla. An undoubtedly suggestive destination, after having admired the finds en plein air and having (re)discovered the Sala Caravaggio inside with the ecstatic Adoration of the Shepherds and the enthralling Raising of Lazarus. Michelangelo Merisi, therefore, in good company with the followers, i.e. the Caravaggeschi exhibited in the other rooms which lead precisely to the Montorsoli. A succession of emotions, such as those released by the Polyptych of San Gregorio by Antonello da Messina.

As stated by Orazio Micali, director of the MuMe: “By the will of the Regional Councilor for Culture Elvira Amata, the Museum has been and will be open to the city also in the evening. A unique opportunity, because citizens can visit a heritage that is theirs ‘after hours’, look at the history of their city, do it through a varied show that increases curiosity even more. Families were offered the opportunity to visit the MuMe peacefully, in a time slot in which they are not engaged in work or even domestic activities. A new, different and additional way to be able to enjoy a reality that must become a permanent part of the cultural life of the community”.

The merit of “Echoes of infinity”, it must be reiterated, lies also and above all here: having made architectural artifacts and art treasures discover to a non-habitual range of users. And to do so through an attractive and varied entertainment proposal, a stimulus of a cultural value declined in the plural. Which had its climax right at the MuMe, with a regained sense of awareness of the Zancleo artistic heritage. “We are very proud – highlights Antonella Ferrara, president of Taobuk – of the close synergy with the Councilorship led by Elvira Amata and of the extraordinary results obtained from the review, despite the very tight deadlines for the realization of an event designed to enhance historical sites in an innovative way , museums and theatres, churches and castles, making them meeting places for heterogeneous languages ​​and for audiences that would not normally choose this kind of location, and have instead been attracted by the transversal appeal of such multifaceted initiatives. Thanks to “Echoes of infinity”, literature and figurative art, music and dance come to life together and merge with the sites: a combination which is the synthesis of a powerful and luminous ‘living matter’, enjoyed through the intersection of languages ​​and genres, especially in a museum that houses works ranging from the classical world to the masterpieces of great artists, such as Antonello da Messina and Caravaggio”.

The evening at MuMe was opened by ten performers directed by Marco Savatteri in his creation “Al pace with the temples – Experience”, a journey into the world of classical Greek myth, between divinatory dance and ritual. Original music, in the form of a capella songs, gave strength to the movements of the performers, similar to living statues, shaped with Greek-inspired tunics. Without interruption came the vibrant reading of David Coco, one of the most important theater and film actor of his generation, who revived significant pages of Sicilian literature of the twentieth century, from the “Hundred Sicilies” by Gesualdo Bufalino to go back to the “Leopard”. by Giuseppe Tomasi di Lampedusa. A path from which a plural Sicily emerges, a consequence of the stratifications of civilizations that have followed one another and settled in the Trinacria, without impeding – indeed galvanized – the formation of a unique, solid, unfungible identity. “In this crescendo of emotional temperature, the Gospel show by Sherrita Duran and her ensemble was grafted, made up of 4 vocalists and an instrumental trio of bassist, pianist and drummer, for an itinerary along the Christmas carols of the Afro-American but also European tradition, without counting the pieces composed with fine sensitivity by Duran herself, soprano voice and timbre, which combines a wide vocal extension with a remarkable stylistic versatility, which allows her to pass from classical to traction, from pop to musical. that interior, deeply religious and linked to the evangelical message, the Californian artist was able to convey a profound spiritual message of peace and brotherhood to seal an evening that will remain long in the memory of the onlookers, accompanied in the various passages by the elegant and competent management entrusted , as for the concert in Catania, to the journalist Elvira Terranova, head of the news agency Adnk ronos, of which he leads the Sicily editorial staff”.

At the end, the inevitable toast, combined with the tasting of typical Sicilian food and wine products, revisited with flair and wisdom by an excellent chef such as Pasquale Caliri “Echoes of infinity” was created by the Regional Department of Cultural Heritage and of the Sicilian Identity in collaboration with the Superintendence of Cultural and Environmental Heritage of Messina, the Regional Gallery of Palazzo Abatellis, and the associations Taormina Book Festival, Siqillyia and Friends of the Sicilian Museums.