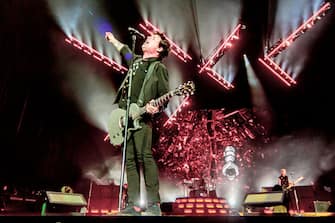 Billie Joe Armstrong on the stage of the I-Days 2022 festival, for the grand finale of the rock festival, a great finale with a bang: Green Day inflamed 45,000 fans who gathered at the Snai La Maura racecourse for the last day of the rock event, Wednesday 15 June

WATCH THE VIDEO: Green Day, 7 curiosities about them

Green Day literally set fire to Milan: between flaming punk rock, firecrackers and fireworks, their show was a show of pure adrenaline and enthusiasm at the highest levels

Here is Mike Dirnt, the historic bassist of Green Day, on the stage of last night’s concert at the Milan Hippodrome. The legendary band offered two hours of pure adrenaline, to round off the I-Days, the rock festival that still holds the record of tickets sold in Italy (210 thousand in the 2017 edition).

Very exciting to hear the words of Billie Joe Armstrong: after thanking the Italian fans for waiting for them two years (remember that this concert was scheduled for 2020 but was postponed due to the pandemic), he shouted: “We are all still alive! “. A moment of intense emotion that makes this post-pandemic concert one of the most engaging of this “new era”, that of the return to great live events.

Bassist Mike Dirnt goes wild on the I-Days stage. The concert began with the classic greeting of the Green Day mascot, that is the “drunk pink rabbit”, the one who has the task of warming the hearts of the public before the start of the band’s live shows. Although the spirits in this case were already highly heated, even the rabbit put some of him into it… During the live, Armstrong invited two fans to the stage, taken from the front rows of the audience. The second of her, a girl named Melita, played the guitar (which she then gave her)

Tré Cool, the historic drummer of Green Day, accompanied in a masterly way the companions of the more than ten-year adventure of American punk rock. We are talking about sacred monsters of this kind, as well as sacred monsters of the seven notes. Released at the beginning of the Nineties for the historic record label Lookout Records (the label that launched the Schreeching Weasel and the Squirtgun of the legendary Mass Giorgini, among others), today the name of Green Day is written in large letters on the intercom of the Olympus of rock

Green Day in concert in Florence, the lineup

Frontman Billie Joe Armstrong was the real star of the evening. “Let’s break all of Milan”, he shouted in Italian. In addition to singing for two hours with a perfectly oiled uvula (it seemed absurd that it was not voiceless at the end of the concert for everything he sang, shouted and said on the Milanese stage), the singer once again the true soul of the group was confirmed, the driving force behind the California punk rock machine

Great success also for the support band: the legendary Weezer, an alternative rock group that has been considered nothing short of cult since the 1990s. Frontman Rivers Cuomo and his associates did not disappoint the expectations of the many fans who gathered at the I-Days precisely for the Blue / Green / Red / Black Album group (in short, Cuomo likes to have them heard in all colors), by Pinkerton, Maladroit etc., as well as by Van Weezer, the last album (15th in the studio) released in 2021