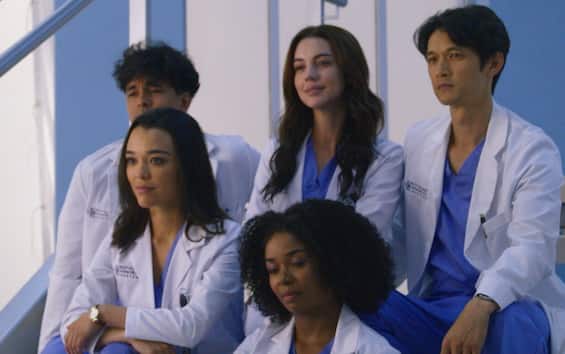 Grey’s Anatomy 19 it will be a season of great changes, starting with the decidedly reduced presence of Ellen Pompeo: his Meredith Gray, in fact, will only be present in eight episodes. In return they will arrive five new characters, and then five new cast actors: Harry Shum Jr., Adelaide Kane, Alexis Floyd, Niko Terho and Midori Francis. A promo published on the social channels of Grey’s Anatomy allows us to take a first look at the new entries in the series.

Grey’s Anatomy 19what do we know

A video posted on the social channels of Grey’s Anatomy shows us the new characters of the season, with the dynamics between trainees who then represent the heart of the plot of the series. Competition and flirtingeverything suggests that the authors of the series intend to return to the origins of the medical drama, even if there is still the unknown of how it will be taken by the fans, the farewell of Meredith Gray. The video begins with the character of Ellen Pompeo, the hospital’s acting chief of surgery, taking a tour with the new group. Each new cast member briefly describes their character, aided by a clip showing him during a scene. In the video we see a clear reference to the pilot episode of the series, which began with Meredith having a one-night stand with Derek Shepherd: one of the new interns (Kane) also sleeps with a “senior” doctor, Link. From the promo of the 19th season there is also the feeling that Meredith is back on good terms with Nick (Scott Speedman) after the big fight in the season finale. “The second possibility it’s one of the big themes of this season, both for the interns and for many of the characters we already know, ”said the writers. In the 19th season the hospital will start a new specialization programand it will be Meredith who will welcome the new doctors, chosen from among those who had previously been rejected, to give them and the hospital a new chance.

Grey’s Anatomywho are the new characters

Daniel ‘Blue’ Kwan, played by Harry Shum Jr., will be a brilliant new resident. Generous but competitive, Blue is very capable and used to always winning. Adelaide Kane plays the role of Jules Millin, a girl who has always had to take care of herself and her parents; Alexis Floyd lends the face to Simone Griffina girl linked to the hospital by a painful personal history. Lucas Adams, aka Niko Terho, is a resident with the aim of proving to everyone that he is a good surgeon despite not having the grades to compete with others. Finally there will also be Midori Francis, played by Mika Yasuda, an aspiring surgeon full of the weak but also of resources, combative and confident. The historical characters Series: Bailey, played by Chandra Wilson, Richard aka James Pickens Jr., Owen (Kevin McKidd) and Teddy (Kim Raver). And then again Maggie, with the face of Kelly McCreary, Winston alias Anthony Hill. There will also be Caterina Scorsone as Amelia, Camilla Luddington as Jo, Chris Carmack as Link’s interpreter and Jake Borelli (Schmitt).