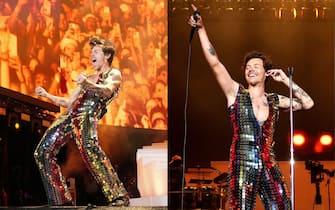 In the vast repertoire of memorable creations of the Gucci by Alessandro Michele era, the clothes created for Harry Styles occupy a special place. Thanks to the synergy with the creative and her stylist Harry Lambert, the British pop star has radically transformed her image becoming a global fashion icon. Here the rainbow look, a colorful mirror suit, for the Coachella Music and Art Festival 2022

The look for the cover of Vogue, December 2020 issue, is iconic. Styles is the first man to become the protagonist of the cover of the famous magazine. With a blazer and a flounced Victorian-style Gucci dress, the singer is the spokesperson for a new form of masculinity. Photos are by Tyler Mitchell

The deep friendship between Alessandro Michele and Harry Styles has led to various collaborations, some official (see the HA HA HA collection), others more amusing. For Halloween 2021, the singer dresses up as Dorothy Gale, the protagonist of The Wizard of Oz, giving life to a masked live tradition, repeated on October 31, 2022 called “Harryween”

Among Alessandro Michele’s first assignments as creative director of Gucci, the personalized look for the Rebel Heart Tour of Madonna’s 2015-16. For the queen of pop, who wore the best of world fashion in those concerts, the designer created a striking costume with a strong Latin inspiration

For the 2020 Grammys Billie Eilish showed off two Gucci looks characterized by the monogram motif with the double G. The singer made her debut with oversized dresses, often pajama-style, used to prevent the sexualization of her body. The work of hiding that evening included two looks: one acid green and another white for the live performance on stage

Grammy Awards 2020, the winners and the most extravagant looks. PHOTO

For the London premiere of House of Gucci by Ridley Scott, Lady Gaga, protagonist of the film, showed off a spectacular dress from the Gucci Love Parade collection for the benefit of photographers

House Of Gucci, Lady Gaga at the film premiere in a purple dress. PHOTO

Friend and accomplice in Michele’s creative ideas, Jared Leto has been one of Gucci’s major testimonials in recent years. At the Met Gala 2019, whose theme was Camp, the exaggeration, the actor and singer amazed everyone by carrying his head, a central idea in the mind-blowing fantastic and futuristic show for the Fall / Winter 2018 collection

If Jessica Chastain is the perfect model of Old Hollywood style, Dakota Johnson is the expression of the sexy side of the Gucci by Alessandro Michele era. The actress enchanted the Venice Film Festival with a semi-transparent dress enriched with fringes of sparkling crystals and on the red carpet she is joined by the stylist

The trio formed by Lana del Rey, Jared Leto and Alessandro Michele drove fashion enthusiasts crazy and many gave them the palm of the best dressed at the 2018 Met Gala whose theme was “Heavenly Bodies”, celestial bodies. The look of the singer, dressed as Madonna complete with a heart pierced with swords, immediately entered history

He may not have won the competition but he came out of the event as an absolute winner. Achille Lauro overwhelmed the 2020 edition of the Sanremo Festival with his looks designed in collaboration with Alessandro Michele and developed by his stylist Nick Cerioni. With his entrance in a black cloak, which hid a transparent onesie studded with rhinestones, the singer made clear the leitmotif of his Ligurian week right from the early evening

Fresh from a triumphant season, the Maneskin made the red carpet of the Cannes Film Festival shine with their Seventies-style Gucci dresses. The band was a guest at the global premiere of Elvisawaited film by Baz Luhrmann: The clothes of the four musicians are, of course, in line with the spirit of the film

Transgressive, provocative and cheeky, Damiano David of Maneskin used the look to demonstrate that he could be a rock star different from the others. Far from the stereotype of toxic masculinity, the singer plays with clothes and thanks to the Gucci looks he places himself on the border between the male and female gender

Muse of Alessandro Michele who made dozens and dozens of Victorian-inspired dresses for her, the singer Florence Welch, revered style icon, was accompanied by the designer at the 2016 Met Gala. Her dress is a very rich creation of embroideries and sequins iridescent

While the other artists do everything to show off, Rihanna on stage at Coachella 2018 covers her face with a balaclava. The Gucci balaclava is consecrated as a cult object

Even the super director of Vogue Anna Wintour couldn’t resist a dress from the Gucci Aria collection, marked by the historic collaboration between Gucci and Balenciaga and she showed up at the fashion shows with a customized model

Among the successful collaborations of the Gucci by Alessandro Michele era, the capsule with Adidas is undoubtedly among the most successful. Attentive to the legacy of the two brands, with the precision of an archaeologist, Michele has brought back to life a model of the 90s sports brand made famous by Madonna who never missed an opportunity to show it off among her recent Instagram shots, creating an interesting fashion short

At the conclusion of the Spring/Summer 2020 collection show, Alessandro Michele sent models in psychiatric hospital uniforms onto the catwalk, launching a provocative message on mental health. These looks, certainly famous, were created exclusively for the fashion show and have never been sold

Not all of Alessandro Michele’s memorable looks are clothes in the strict sense and in the Gucci designer’s career the intuition of using the atypical smile of the punk singer Dani Mitchell at the center of the Gucci Beauty campaign deserves mention, which in 2019 made the brand more than one million lipsticks in the first month after the launch of the products on the market. Michele deserves credit for having imposed new standards of beauty, a concept he understood in an absolutely inclusive sense