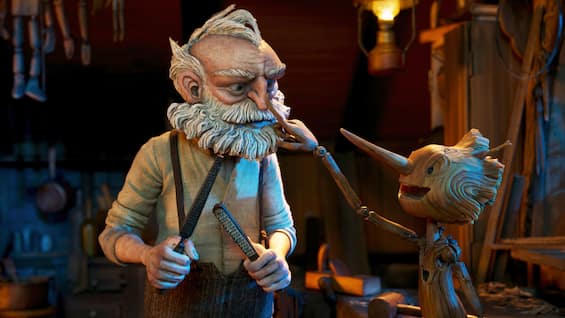 
Even in a historical period in which we are almost “inundated” by cinematic reinterpretations of the epic of Pinocchiothe one of Guillermo Del Toro however, it remains highly anticipated. His version of the puppet’s adventures not only promises to have important sub-texts but also draws from an unprecedented visual imagery for the character invented by Collodi. In fact, no one had ever thought of a Pinocchio animated with stop-motion before del Toro, who had to go through many difficulties over the years before being able to complete a film with this fascinating technique. And to think that the visionary Mexican author had really begun to think of himself as a director thanks to stop-motion, only to then turn to live-action above all for a question of cost-opportunity.

Del Toro is a great animation enthusiast, so much so that he even taught the rudiments of the subject for a while to almost his peers when he was only 17 years old. Some time later, the Mexican-born filmmaker even set up a company of his own, together with his brother and his girlfriend at the time. They dealt with stop-motion and special effects often working also for the advertising world. After ten years in the industry, Guillermo Del Toro felt ready to make his debut behind the camera of an animated feature film with that expensive but unique technique. The future director of The Labyrinth of the Pan he spent months and months creating the puppets that would then be moved in step one, he worked on their armor, on the costumes of the characters and even on the sets. The first day of shooting seemed like the beginning of a great fairy tale but all that work was destroyed in the time of a lunch break, thanks to thieves who were also unable to understand what they were stealing. “We went to dinner, and they robbed us. The thieves, frustrated at not having found anything of value, destroyed every single puppet, defecated on the floor. That was the signal for me to dedicate myself to live action. I said: I have to shoot films from life”, recalled Del Toro a few days ago. In 1993 the director actually made his debut with Chronos, without approaching animation directly anymore. He promised himself that he would only return to stop-motion for a big project that he had dreamed of since he was a child. Eventually he would realize it but only many years later. That project was Pinocchio.

The Pinocchio by Guillermo Del Toro is truly a very personal work. He also confirmed it himself during the presentation of the film, explaining how Collodi’s fairy tale has always represented a special story for the Del Toros: “It connects me to a very strong connection I had with my mother. It was the second or third movie we saw together in the cinema. Even in my house Pinocchio is revered. This means that this is the Pinocchio by Guillermo Del Toro. It’s not Disney, it’s not Collodi. It’s mine. So, starting from this, if you come expecting anything else you won’t like it”. The idea of ​​creating his own Pinocchio accompanies the director more or less all his life but it really started to take shape only around 2004. At that time Del Toro had come into contact with Lisa Henson, CEO of the Jim Henson Company. The house of Muppets had been working on a version of the puppet story two years earlier and planned to put the director fresh off the success of de The Devil’s Thorn at the head of the operation. Unfortunately, both for the financial outlay necessary and for the difficulties in proceeding quickly with the stop-motion, the project remained only on paper. However, the idea never abandoned the filmmaker, who over the years has proposed a vision of him to just about anyone in Hollywood: “Even at the time any major film major had bounced back on it. Everyone let it go, it took 15, 16 years to make this film”.

A puppet with “woody” movements

Today Pinocchio is ready to finally be seen by the public, first in some selected theaters and then on Netflix (also visible on Sky Q and via the app on the Now Smart Stick) from 9 December. But what forced Guillermo Del Toro into such a long gestation of the project? The same technique that makes his version so special: stop motion: “It’s one of those arts that is in perennial risk of extinction because … it takes a long time. It takes a lot of effort. Everything is physical.” To have an entire film built this way you need to build thousands of models and puppets: you have to physically build a world from scratch. Yet this expensive and all in all ancient technique, despite everything, has survived for years the advance of any technology and even the most comfortable computer graphics. Del Toro is certain that stop-motion will “remain over the years”, giving us masterpieces like this o Nightmare Before Christmas passing through studies jobs such as English Aardman. To understand what the unique advantage of this particular way of animating is, perhaps it is worth thinking about Pinocchio which, as the creator of its latest version recalls, is enhanced precisely by this “perfectly imperfect” process. “I think this type of animation makes the film more realistic than the other fluid animation styles used today,” del Toro explained. The idea is that the nervous and necessarily “woody” movements of a puppet can be better reproduced by this procedure which gives the idea of ​​a movement almost “jerky”. We’ll see what the yield of so much effort will be on the screen. Meanwhile, the idea of ​​a Pinocchio which for once exalts “disobedience and not obedience” will surely fascinate everyone, even those who haven’t watched a cartoon since the days of Pinocchio branded Walt Disney.