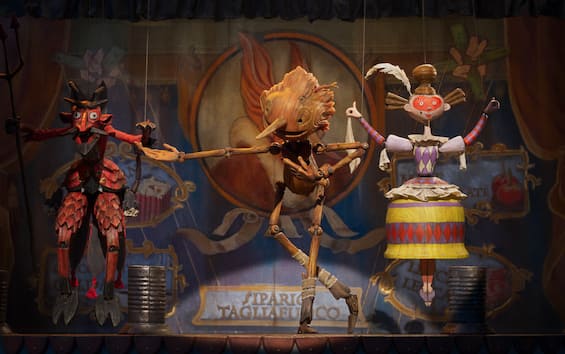 Netflix presented two videos with the making of di Pinocchio by Guillermo del Toro. These are two featurettes that show the incredible craftsmanship done by the film’s animators, who combine classic and modern techniques in a truly admirable way. Their astonishing art demonstrates what director Guillermo del Toro has been saying for years, namely that “animation is not a genre but an expressive and artistic medium”.
The renowned filmmaker also believes that animation should not be confined to storytelling for children.
The two videos (which you can watch at the bottom of this article) feature several contributions and interviews, from Guillermo del Toro to the film’s other director, Mark Gustafson.
Lead animator Chuck Duke, editor Holly Klein, animation supervisor Brian Leif Hansen are interviewed. There are character art and technical director Georgina Hayns, animation supervisor Brian Leif Hansen, character sculpt lead Toby Froud and creative supervisors Ian Mackinnon and Peter Saunders.
The interpreters Tilda Swinton and Christoph Waltz are not missing either.

You can watch the two videos with the making of by Pinocchio at the bottom of this article.

The words of Guillermo del Toro

But to make his film great are also the many other “Geppetti” who worked on the set, protagonists of these two featurettes to watch absolutely (at the end of the article).
“When we started dealing with this Pinocchio, I knew I wanted to do my own version. I didn’t want to present just an adaptation. This Pinocchio is a new retelling of a story you think you know, but really don’t there you know,” says del Toro.
His film never ceases to gather innumerable acclaim from both audiences and critics.
The Oscar-winning director has reinvented the great classic by Carlo Collodi dedicated to the famous wooden puppet that comes to life to warm the heart parched by the pain of Geppetto, a mourning carpenter.

Below you can watch the two videos with a focus on the craftsmanship of the animators of this film.