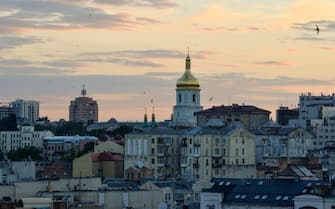 Among the targets of the Russian troops would be the St. Sophia Cathedral in Kiev. The Ukrainian embassy to the Holy See gave the news: “The intelligence believes that the Russian army is reportedly preparing an air strike on the Cathedral, a Unesco heritage site ”

Declared World Heritage Site in 1990, the imposing St. Sophia Cathedral in Kiev, pride and pride of the city with its gold and green domes and monastic buildings, is the symbol of the thousand-year old Ukrainian capital and the unity of the country

Its construction, started in 1037, is due to Jaroslav the Wise (1016-1054). His father, Vladimir I Svyatoslavic of Kiev, had converted to Christianity in 988 by embracing the Orthodox rite and had a first church dedicated to the Virgin built (which collapsed two centuries later)

Jaroslav had a larger one built, taking its name from the Hagia Sophia of Constantinople. Erected on the highest hill in the city, at the crossroads of the four main entry routes to Kiev, the new church must have struck pilgrims for its grandeur

The interior of the church, conceived as a 5-nave basilica, is inspired by ancient Russian churches and houses the 11th century Byzantine-style mosaics, which cover a total of 260 square meters of surface.

With its magnificence Hagia Sophia was the place of the coronation of the Ukrainian princes. Behind the high four-storey bell tower, topped by a golden bulb dome, the 12 smaller domes built in a style reminiscent of the Baroque shine

After the revolution of 1917, the Russian government had decided to destroy it, averted only thanks to the appeal of historians and scientists. In 1934, the Soviet authorities confiscated the complex and turned it into a museum. Today the whole complex is a museum of Ukrainian Christianity

The major archbishop, Monsignor Sviatoslav Shevchuk, invites “all Christians to pray for the spiritual sanctuary of the Slavic peoples and urges the aggressor to refrain from this horrible act of vandalism”