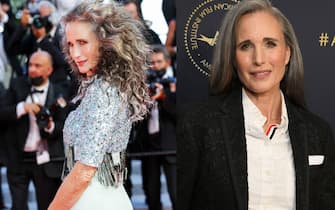 Andie Mac Dowell, born in 1958, has chosen not to dye her hair for a couple of seasons to show a freer and more authentic image of herself, in the photo on the left she is parading for L’Oréal at Paris Fashion Week. On the right, instead, with a more sober look and in a smooth version

The model (of Armani) and actress Greta Ferro is a mix of charm and timeless beauty, regardless of the hairstyles shown on the most prestigious red carpets

Whatever the outfit and hairstyle, Nicole Kidman is a concentrate of class, and in the curly or smooth version it shines with its own light

The Undoing, Nicole Kidman’s looks in the tv series

The same is true of Michelle Hunziker in the photo, on the left with a lot of long curls on the shoulders and on the right with the most classic of smooth medium-length helmets

Michelle Hunziker, the best looks of her career

She is one of the most loved style icons in Hollywood (and not only), Sarah Jessica Parker indifferently flaunts her hair by changing her hairstyle often, from the most voluminous curls to the most extreme straight

Carrie Bradshaw and the pigeon-shaped bag that is already trendy

Oscar-winning actress Penelope Cruz is used to showing off her smooth hair, but there are many occasions when she has shown herself curly, as in the photo on the left with bob and central parting

The queen of influencers Chiara Ferragni in the photo on the left shows herself with long hair and flawless waves, on the right she opts for a rigorous smooth, always on long hair and parting in the middle

Sanremo 2023, Chiara Ferragni on the Ariston stage for the first rehearsals

From the most rebellious hedgehog to the smooth noodle, Beyoncé can afford any type of hairstyle, although in recent years she has chosen the latter.

Hair fashion, the chignon is the must have of the summer. PHOTO

Julia Roberts, also one of the most beloved actresses on the planet, has always sported her very rich hair, curly version on the left, decidedly flat on the right

Julia Roberts: “My daughter wanted the 2001 Oscar dress for prom”

Cameleon, Celine Dion’s hairstyle change, which is shown on the stage on the left, wavy version and during a walk in the city on the right with a smooth bob

Hair fashion, the 12 trendy cuts to be inspired by

Impossible to choose which hairstyle you like the most, curly or straight, Kate Hudson never misses one

What about the newlywed Jennifer Lopez? JLo on set (and beyond), she invariably shows herself in all her impeccable style. Curly or straight, her hair is always super chic

The most beautiful wedding dresses in movies, from Jennifer Lopez to Audrey Hepburn. PHOTO

Halle Berry in both versions

Fashion, palazzo pants are the must-have of the autumn wardrobe

Mica Arganaraz, queen of the catwalks

Blake Lively has no rivals, much less in terms of hairstyle

Kim Kardashian and her transformations

Bella Hadid can do everything, in terms of hairstyle first of all

Bella Hadid, the dress sprayed on the body shows in Paris. VIDEO

Salma Hayek, the viral video on the notes of Britney Spears

Taylor Swift’s style is flawless as always, on the left with curls along the shoulders and on the right with a very glam short bob

Naomi Campbell, one of the most popular supertops on the planet, flaunts both types of hair with charm, the result is always the same: unique!

And among the super models, the colleague Helena Christensen (Victoria’s Secret angel from 1997 to 1998) could not be missing, a concentrate of refined elegance, starting from the hair (never out of place)

From Naomi Campbell to Kate Moss: the super models of the 80s and 90s. PHOTO