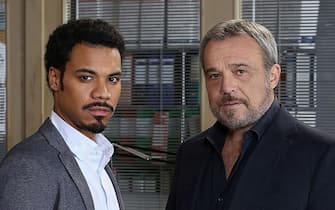 Half black is the crime fiction broadcast on Rai1 every Monday. The third season restarts from the end of the second, with the shocking return to Rome of Clara, Carlo’s first wife, as well as Alba’s mother. The woman, after a long period of inaction, returned to Rome to serve her sentence and ask forgiveness from her daughter, who, although confused, decides to give her a chance despite her father’s disagreement.

WATCH THE VIDEO: Who is Margherita Vicario

Claudio Amendola plays the protagonist, commissioner Carlo Guerrieri. Well-liked inspector of his team, he had to raise his daughter Alba alone following the abandonment of his wife Clara

I cassamortari: the trailer of Claudio Amendola’s film with Piero Pelù

Malik Soprani is Guerrieri’s deputy and is portrayed by Miguel Gobbo Diaz. Deputy inspector originally from the Ivory Coast, he was orphaned when his family died in the sinking of the boat that took them to Italy

Mario Muzo, played by Fortunato Cerlinois the chief superintendent, a classic gruff with a difficult character

Fortunato Cerlino, when Don Pietro di Gomorra only wanted to be a singer

Rosa Diletta Rossi plays Alba, daughter of Carlo. You work at the Institute of Forensic Medicine

Who is the singer Margherita Vicario

Margherita Laterza she plays Clara, Guerrieri’s wife considered dead who returns to Rome to turn herself in

Luca Cesa is Federico Viessi, educator in the Rebibbia prison in the women’s section where Clara was imprisoned