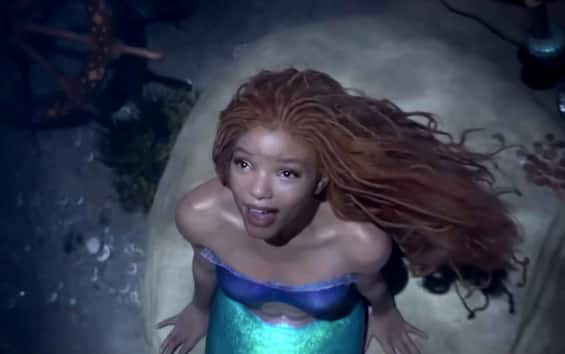 Remote rays of the sun touch the embrace of the sands and waters that protect a mermaid with long red hair. In the foreshortening of a cave in the abyss, the sinuous green tail floats on a rock, while small bubbles of desire swim towards the mystery of the surface. Halle Baileyprotagonist of the live-action Disney The little Mermaid outgoing in 2023, shared the film’s teaser poster on Twitter. “Words cannot describe how immensely honored I feel to play the siren of my dreams, Ariel in the Disney movie The little Mermaid. Come to the bottom of the sea with me, in cinemas on May 26, 2023 ”.

The live-action The little Mermaid (inspired by Hans Christian Andersen’s fairy tale of 1837 and preceded by the classic Disney animated film of 1989) tells the story of the princess-mermaid Arielthe youngest daughter of the King of the Sea Triton (interpreted by Javier Bardem), intrigued and fascinated by the world of humans. Love for the Prince Eric (interpreted by Jonah Hauer-King), a human saved from a shipwreck, will strengthen Ariel’s desire to know and experience the surface. The disapproval of the father and the power plays of the Witch of the Sea Ursula (played by Melissa McCarthy), however, will hinder the search for the girl’s identity.

The film’s teaser poster comes after the trailer, released last September, which has racked up more than 24 million views but has also raised controversy over the skin color of the African-American lead actress. The web reacted to racist comments especially on TikTok, where the viral trend She is like me released videos of the enthusiastic reactions of black girls around the world to the sight of Bailey’s Ariel. “I want the little girl in me and the little girls exactly like me who are watching to know that they are special, and that they should be princesses in every way. There is no reason why they shouldn’t be. This reassurance was something I needed “she told her a Variety the actress, who also shared the solidarity expressed by her grandparents on discrimination: “It was inspiring and nice to hear their words of encouragement when they told me:” You don’t understand what you are doing for us, for our community , for all the black girls who will see themselves in you “”. Social controversy aside, the choice of Bailey as a leading actress had been firmly decided by director Rob Marshall as early as 2019, as reported by The Hollywood Reporter: “After a long search, it became quite clear that Halle possesses that rare combination of wit, heart, youth, innocence, and substance – as well as a beautiful singing voice – all intrinsic qualities needed to play this iconic role.”