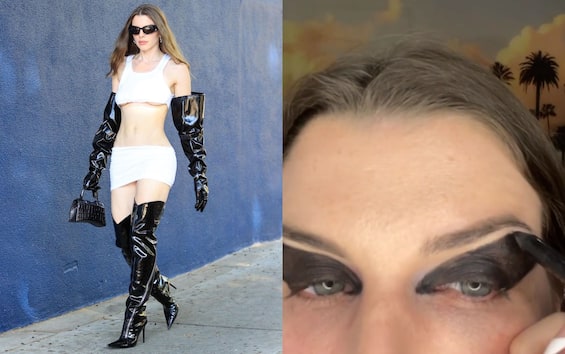 Self Halloween it is an all-round exaltation of symbols and pop culture icons, Julia Fox it definitely deserved a place among those celebrated in season 2022.

The American actress and model, constantly at the center of the media debate for at least ten months, is one of them more inspirations of girls and boys for the disguisei of All Saints’ Eve.

Her outfits are top of the favorites for themed parties, especially because i costumes can be made starting from existing clothes in the housejust as the creator of the looks explains in her by now famous tutorials.

Given the sheer amount of Stories reposted on her personal Instagram profile, Julia Fox really hit the spot for Halloween by becoming one of the greatest inspirations of the 2022 season.
Already famous for its style in the New York underground art scene, Fox in a few months made everyone forget that it had made a huge leap in popularity thanks to Kanye West with whom he had one short love story.

Judged by many to be a passing phenomenon, the 32-year-old instead stands out as a protagonist in the already crowded scene of American celebrities, elbowing among well-known fashion influencers as a spokesperson for one absolutely new style.

Not without a great deal of courage and impertinence, Fox has defied every convention in terms of morality and decency by showing itself in public, at events but more willingly on the streeta, with super bold looks which, rather than cover, they left the body uncovered.

At the same time, Fox also had a lot to say in terms of fashion by forcing insiders to pay attention to it. It is thanks to her, in fact, thatfetish-core exaltation which involves the use of garments that draw inspiration from the universe of bondage, as well as the massive use of makeup boldboots, total denim, bandeau micro-tops, all trends partly seen on the catwalks and worn by Fox like a uniform who ended up telling about his personality.

A lover of fashion but indifferent in granting its preference to haute couture stylists as well as emerging designers to whom it willingly offers a showcase, Fox soon became appreciated by fans for having unveiled some of her fashion and style tricks.

The model, who said she was “her own muse,” said that anyone can be cool even with clothes made at home starting from an old garment refurbished with a couple of scissors.

In one of his famous video tutorial, Fox showed the construction of a full top and miniskirt made from a simple cotton tank top; in another, she made a low-rise jeans out of fashion. On the beauty front, she taught everyone to create the famous “Fox Eyes”the double-layered black eyes designed by the great Pat McGrath with whom he shocked Paris Fashion Week (so viral on social media to the point that the filter for the “Julia Fox” Stories immediately popped up on Instagram) without the help of professional make-up artists .

The costume inspired by The fifth element hand made

For Halloween, Julia Fox is reaping the fruits sown in recent months through the posts of her admirers who, dressed in miniskirts, tight vinyl pants, cuissardes boots and long raincoats, declare their unconditional love to her.
She herself, moreover, told via Instagram that she had had one misadventure with his costume for the holidays, lost and redone by hand (by her, of course)with materials found at the last minute, an hour before leaving.
Fortunately, the look of the chosen subject, the character of Leeloo de The fifth element, it was simple to do. Played by Milla Jovovic, the humanoid with short orange hair, was covered with fabric bandages by the hands of an author, those of Jean Paul Gaultier, named by Besson for the film’s wardrobe. With the amphibians the leather jacket, Leeloo has become a cult in the cosplayer environment and is also appreciated by Julia Fox who does not disdain the sci-fi look.