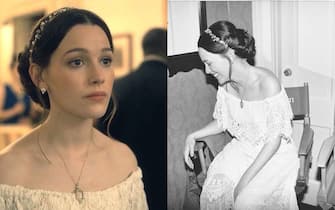 The world of movies and TV series is a great source of inspiration for the most amazing Halloween costumes. With a romantic white dress with flounces, an updo hairstyle, a crown of flowers and some vintage-style jewelry it will be easy to step into the shoes of Nell Craine, one of the victims of The Haunting of Hill House, Mike Flanagan’s Netflix show (also visible on Sky Q and via the app on Now Smart Stick) about America’s most famous haunted house. In the series the character has the face of Victoria Pedretti

With twelve seasons and numerous characters, the series American Horror Story is perfect for finding inspiration for Halloween. Iconic is the character with the latex suit, a costume that is worn to commit the worst crimes in the first season. This, too, can be accomplished with dark clothing, long gloves, and a face mask

Costumes for Halloween, 10 ideas for children inspired by movies and TV series

The extraordinary interpretation of Margot Robbie has made the character of Harley Quinn, supervillain of the DC Comics universe, become very popular. With Suicide Squad And Birds of Prey, the look of Joker’s girlfriend has become even more iconic: pigtails, fishnet stockings, short printed t-shirt, shoorts and two-tone red and blue jacket

Couple costumes for Halloween, 25 ideas for horror make-up and disguises

The Nun – The Vocation of Evil2018 film from the horror universe of The Conjuringoffers gloomy religious ideas: novice nun (as the protagonist of the film, Taissa Farmiga) and evil sister (who recurs in history to terrify the public)

If making Vecna’s costume the same could prove to be a bit complicated, it will be easier to focus on other protagonists to stay on topic Stranger Things. Steve and Robin’s ice cream uniforms, beloved by fans, are truly adorable: brightly colored and easy to reproduce

Marvel fans literally loved his character, even in the devilish version he appeared in Doctor Strange in the Multiverse of Madness. Attention, therefore, to the details of Elizabeth Olsen’s Scarlet Witch version of the suit which is very different from that of the superheroine Wanda Maximoff

Halloween, the most beautiful couple costumes of the stars to be inspired by. PHOTO

For fans of classic TV shows, Dana Scully, the FBI special agent called to investigate the X-Files is an evergreen. The character made famous by Gillian Anderson dresses in a rather formal and ordinary way: shirt, trouser suit or skirt with jacket with shoulder pads, red helmet and very serious air

Halloween 2021: the disguises of the VIPs. THE PHOTOS

Halloween cannot miss the witches and Sabrina Spellman, protagonist of The terrifying adventures of Sabrina, is one of the most recent versions on the theme offered by TV series. The protagonist (Kiernan Shipka) never misses a headband in her hair and a high-neck pullover. Colors? Red or black

Daphne, protagonist of the first season of Bridgerton, has thrilled millions of fans with the story of her search for love. Her on-screen interpreter Phoebe Dynevor gave the heroine a rather recognizable image made up of pastel-colored dresses typical of the English Regency age. To bring it back to life on Halloween, you will need curls, satin gloves and some feathered accessories

To stay in the nineteenth century, Nina Dobrev, the great darling of TV, has given life to another iconic character suitable for celebrating Halloween: it is Katherine Pierce, the bloodthirsty vampire of the Vampire Diaries. For her, dresses with corsets, voluminous skirts and long hair full of curls. And pointed canines, of course

Among the many characters that Sarah Paulson gave life to, that of the sadistic nurse of Ratched, television series signed by Ryan Murphy, has certainly become famous given the success of the show in streaming. To play her on Halloween, he’ll need the green smock and vintage-inspired make-up with lots of powder and scarlet lipstick.

A costume that is good for three, because on Halloween the group disguise is even more amazing. With the release of Hocus Pocus 2 fans of the Sanderson sisters will have even more reasons to bring out corsets, cauldrons and sorghum brooms. Without forgetting a candle with a black flame

The passage of time has not affected the charm of the protagonist of The black Swan, especially in its evil and corrupt version. For the costume you need some black tulle and a little patience to reproduce the characteristic make-up of Natalie Portman

Even after the hype that characterized the season of its airing, Squid Game continues to be talked about, especially in view of a sequel. The green jumpsuits of the deadly collective game participants, complete with white Vans shoes, are a perfect victim costume for Halloween. Here is what the look of the women of the show was: in the foreground, the Korean HoYeon Jungcon, aka 067

Laurie Strode, the greatest scream queen and horror film icon, has a highly recognizable appearance that Jamie Lee Curtis, her big screen performer in the saga Halloween, has helped to keep it intact over time. His costume is quite ordinary: blue shirt, thin belted trousers, unkempt hair. And, of course, a cutlass in your hands to defend yourself from any kind of assault