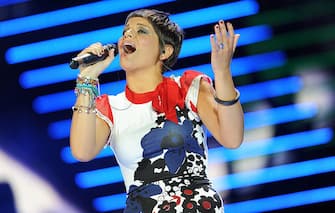 Alessandra Amoroso was born on August 12, 1986 in Galatina, in the province and Lecce, and already at an early age participates in numerous competitions at the local level. In 2007 she wins the second edition of the Pugliese Fiori di Pesco competition she and she is 17 years old she participates in the auditions for the talent show Amici di Maria De Filippi but she is rejected

Alessandra Amoroso, photos of the concert at San Siro

The singer’s first single is “Immobile”, a song that reaches the first position of the Top Singles and is certified platinum by the FIMI

Alessandra manages to enter Amici in the eighth edition of the program. On 14 January 2009 she enters the evening phase and on 25 March 2009 she is proclaimed the winner, thus obtaining the first prize of 200,000 euros and also the critics’ prize.

Alessandra Amoroso meets the fans and Tutto Accade, also of living in color

In March 2009 the second single of the singer was released, “Stupida”. The song gets a great success and anticipates the release of the singer’s first EP, released on April 10 of the same year. The record is certified gold and then triple platinum

Alessandra Amoroso, all the changes of the singer’s look

The singer’s debut album is “Cloudless”, released on September 25, 2009

Alessandra Amoroso turns 35: from building to living in color, her great successes

This is how the doors of the Sanremo Festival open up for Alessandra. In 2010, she treads the stage of the Ariston as a duet: she interprets the song “For all the times that …” with Valerio Scanu, who then triumphed in that edition

On 1 September 2010 the single “La mia storia con te” was released which became the leading single from the unreleased album “Il mondo in un Secondo”, published on 28 September 2010 by Sony Music, thanks to which she was also awarded the Wind Music Awards 2011

Alessandra Amoroso, the tracklist of the album “Everything happens”

In 2012 he released the album “Cinque passi in più” which includes among the songs “I wait”, “Take care of me”, “It is true that you want to stay” and “It happens”

In 2013 he released his album “Pure Love”, then certified double platinum. Among the songs “Da casa mia”, “I’ll be better” and “Defend me forever”

On 21 June 2014 Alessandra wins the award Wonder Woman at the MTV Awards 2014 surpassing the other candidates: Katy Perry, Laura Pausini and Miley Cyrus. In the same month she participates in the Summer Festival where she wins during the third evening with “You must not lose me”

On January 22, 2015, the singer announced the release of the book “In my way I love you” written by her and which collects various stories and thoughts written by her fans. The book was then published on March 10 and enjoyed incredible success

In 2018 Alessandra Amoroso releases her sixth studio album “10”, a title chosen to celebrate ten years of solo activity. In the first week of publication, the album was certified gold for having sold over 25,000 copies

Alessandra Amoroso: the new single is “On your side”

Guest of the 69th Sanremo Festival (2019), he receives a standing ovation from the public thanks to his interpretation of “Io che non vico (senza te) with Claudio Baglioni.

Among the songs he released in 2019 are “Dalla tua parte”, “Forza e courage” and “Mambo salentino”, the single recorded by Boomdabash in collaboration with the singer, certified triple platinum. In December of the same year you publish a new version of “Immobile” entitled “Immobile 10 + 1”, on the occasion of your ten-year career

During Sanremo 2021 Alessandra Amoroso and Emma Marrone, for years linked by a deep friendship, presented “Piece of Heart”, their first duet together

Piece of heart, Emma and Alessandra Amoroso at Sky TG24: it’s a hug to those who follow us