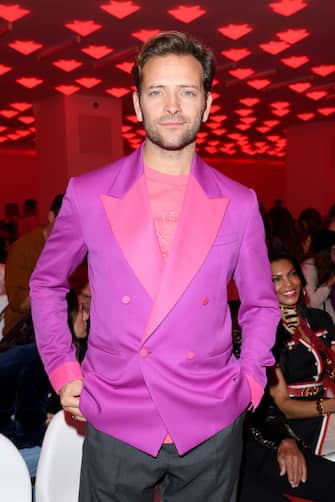 Alessandro Borghi, born in Rome on September 19, 1986, attended the Jenny Tamburi acting school and began his career in the entertainment world as a stuntman thanks to his passion for sport and martial arts. Today in the Italian cinema scene he is one of the most loved actors

The Hanging Sun – Midnight Sun, the trailer and poster for the Sky Original movie. VIDEO

2014 is an important year for his career, Sollima calls him to interpret Number 8 in the film “Suburra”, a role that he will also resume in the television series of the same name, and Claudio Caligari entrusts him with the leading role together with Luca Marinelli in “Non be bad “(2015).

Both interpretations earned him several awards: the FICE Award, the Vittorio De Sica Award, the NuovoImaie Talent Award as best emerging actor at the 72nd Venice Film Festival and the Special Silver Ribbon (both for Caligari’s film), the Graziella Award Bonacchi and the Persol Prize (these two always at the 2016 edition of Nastri) and the nomination for the David di Donatello

Devils, all there is to know about the second season

Stefano Cucchi’s masterful interpretation in the film directed by Alessio Cremonini On my skin earned the Roman actor the deserved attribution of his first David which, held in his hands, was dedicated to the young boy who died at the Sandro Pertini hospital in Rome on 22 October 2009.

Popularity is not long in coming, it is 2015 when Suburra comes out in theaters, where he plays the underworld role of the Ostia boss Aureliano Adami. The interpretation earned him a nomination for the David di Donatello and the victory of the Ciak d’oro as the revelation of the year, moreover the success of the film will lead to the creation of the homonymous series in 2017.

It is precisely with Suburra the series that Borghi achieves the desired fame and the doors of success are wide open before his eyes.

Devils 2, the cast on the red carpet. PHOTO

2017 is undoubtedly a lucky year for Alessandro Borghi who, while entertaining the small audience as Adami, is on the big screen as the protagonist of The Place (2017) by Paolo Genovese and of Napoli veiled by Ferzan Özpetek, for which he obtains a second nomination to the David di Donatello.

Strengthened by the triumph of the film On my skin, Borghi is back on the big screen, once again Rome is the scenario in which his performance takes shape, but it is the Urbs of the dawn, that of Romulus and Remus in Il Primo Re ( 2019) by Matteo Rovere.

Diavoli arrives in 2020: the story revolves around the deep bond between the two protagonists: on the one hand, the Italian Massimo Ruggero (played by Alessandro Borghi), a perfect example of a self-made man and unscrupulous Head of Trading of one of the most important banks of the world investment, The New York – London Investment Bank (NYL); on the other, Dominic Morgan – played by Patrick Dempsey – one of the most powerful men in world finance, CEO of the bank and mentor of Massimo

The partnership between the two men will begin to crumble when, due to Dominic’s secrets, Massimo gets involved in an intercontinental financial war and will have to choose whether to trust his mentor or try to stop him.

Devils, the teaser trailer of the TV series coming to Sky

In 2021 he starred in “Superheroes” by Paolo Genovese, “Mondocane” by Alessandro Celli, “Delta” by Michele Vannucci and “Diversamente” by Max Nardari

2022 is the year of the second season of “Devils”. Alessandro Borghi returns to the side of Patrick Dempsey to take on the role of Massimo Ruggero, now CEO of NYL.

Villages in Venice for The Hanging Sun – Midnight sun