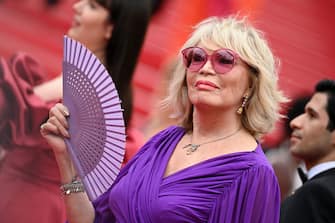 Amanda Lear, born Amanda Tapp, was born in Saigon, it is not officially known when. But many sources say November 18, 1939. If she really turns 84 today, we can’t help but celebrate her in a big way. Though she’ll never admit when it’s her birthday, she’s part of the game and the mystery that has fascinated her all her life.

Its beauty and magnetism struck the surrealist painter Salvador Dalí, for which he posed several times

Amanda Lear, the most beautiful photos of the diva

Amanda Lear, the most beautiful shots of an icon. PHOTO

Thanks to that photo on the cover of the Roxy Music record, Amanda Lear began a relationship with David Bowie

It was David Bowie who urged her to enter the world of music. The first producers of her were La Bionda

He became an icon as an interpreter of Disco music, becoming famous throughout Europe, as well as in South America, Japan and other countries of the world

Among his great successes, we remember the singles Tomorrow And Queen of Chinatown

He has released 18 albums, more than 50 singles. He has sold an estimated 15 million albums and 25–30 million singles worldwide

On December 11, 1965, at age 26, she married Morgan Paul Lear. On 13 March 1979 she married the French aristocrat Alain-Philippe Malagnac d’Argens de Villèle, music producer, as well as lover and adopted son of the writer Roger Peyrefitte. In 2000 Malagnac died at the age of 51 in a fire at their villa in Provence. Amanda Lear later dedicated the album to him Heart

In 2014, she was in a relationship with actor Anthony Hornez, who is also 40 years her junior

Since 1981 Amanda Lear has lived in Saint-Étienne-du-Grès, near Avignon, in the south of France