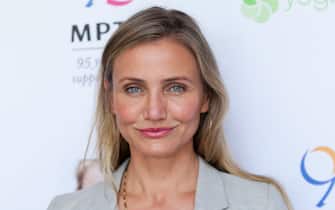 On August 30, 2022 Cameron Diaz turns 50. Born in San Diego in 1972, the actress and model among the most popular on the Hollywood scene, she has abandoned her film career. She has received four Golden Globe nominations, acting in films of rather transversal genres and being appreciated for her flexibility and for a beauty that has remained unchanged over time.

Cameron Diaz to Gwyneth Paltrow: “I would never have become a mom if it weren’t for you”

The actress begins to take her first steps in the entertainment world at the age of 16 when she starts working as a model for the Elle agency and travels the world after finishing high school.

From Sean Connery to Cameron Diaz, the actors who said goodbye to the cinema. PHOTO

The big screen debut came in 1994, when the actress was 21 years old: she starred in the film “The Mask – From zero to myth” with Jim Carrey (pictured with Lauren Holly on the left)

But the film that definitively consecrates her and makes her known to the general public is 1998’s “Tutti pazzi per Mary” with Ben Stiller (pictured). For the role of Mary Jensen, Diaz receives a Golden Globe nomination for Best Actress in a Motion Picture, Comedy or Music

“All crazy for Mary”, the cult film with Cameron Diaz

Another commercial success is the Charlie’s Angels saga, together with Drew Barrymore and Lucy Liu, in which the three actresses play secret agents in the service of the mysterious Charlie and are very skilled in martial arts and disguise techniques.

Fashion, 10 summer trends to be inspired by for the return to the office

In 1999, a year before the release of the first chapter of Charlie’s Angels, Oliver Stone’s masterpiece “Every cursed Sunday” with Al Pacino also arrives on the big screen. In the film Cameron Diaz plays Christina Pagnacci, owner of the Sharks football team and committed to restoring the company to the glories of the past

In 2001 she starred with Tom Cruise (pictured) in the film “Vanilla Sky”, receiving a nomination for Best Supporting Actress at the 2002 Golden Globe.

Fashion, the rediscovery of the undershirt. How celebs wear it

Venice Film Festival: the most beautiful looks and clothes of the past editions

Together with the actor Jason Segel (in the photo) he is the protagonist of two successful comedies: “Bad teacher – Una bad teacher” of 2011, in which there is also Justin Timberlake, and “Sex tape-Finiti in rete” of 2014

Cameron Diaz is all crazy about Jason Segel

Diaz’s most recent film on the big screen is Will Gluck’s “Annie – Happiness Is Contagious” in 2014. The American actress also voiced Princess Fiona in the celebrated “Shrek” animated saga.

Summer 2022, the bucket hat remains a trend: how the stars wear it. PHOTO

In her life Cameron Diaz has had several romantic relationships with other well-known personalities: from 1995 to 1998 she was engaged to actor Matt Dillon (pictured). She subsequently was linked to actor and singer Jared Leto until 2003 and to songwriter Justin Timberlake

Since 2014 she has been in a relationship with Good Charlotte singer Benji Madden (pictured). The two married in Los Angeles in 2015. On December 30, 2019, their daughter Raddix was born, to a surrogate mother. In 2014, the actress announced her indefinite retirement from the scene to devote herself to her private life.

From Sean Connery to Cameron Diaz, the actors who said goodbye to the cinema. PHOTO

Cameron Diaz said goodbye to the cinema and now reveals the reasons in an interview with Gwyneth Paltrow: “I found peace by stopping acting”

Cameron Diaz: “I don’t care about my appearance and I never wash my face”

“I can finally take care of myself”: the star’s words about her decision to leave the cinema of the time. Today she is expected on the screens in a new film

Cameron Diaz confessed to being a drug courier

The actress, born under the sign of Virgo, celebrates her 50 years supported by love with musician Benji Madden and daughter Raddix