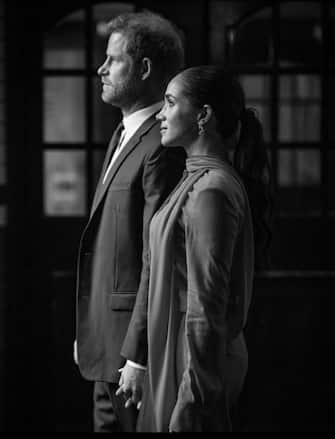 A few days after the publication of the first portraits of the royal family after the death of the Queen Elizabeth IIthe new official photos of the Duke and Duchess of Sussex also arrive, Harry and Meghan Markle. The images were taken by Misan Harrimantheir trusted photographer, just a few days before the death of the former monarch, on the occasion of the summit One Young World in Manchester

In the two photos, one in color and one in black and white, Harry and Meghan are seen together hold hands backstage at the summit, the first public event they have attended in the UK since – in 2020 – they have abandoned their institutional posts as part of the royal family. ‘A picture speaks for a thousand words‘goes an Anglo-Saxon saying:’ A picture is worth a thousand words’. This is also the case in this case, at least according to the expert of body language Judi James

To the SunJames underlined how the two shots seem to want to give an institutional image of Harry and Meghan, united and with a tone of “presidential couple“. It does not go unnoticed that in both photos it is Meghan to be always on top. In the color one, James says, the husband’s body language expresses support and closeness to the spouse. In the black and white one, in profile, the gaze of the two facing upwards would suggest their look to the future

Media, Prince Harry and Meghan Markle are looking for a new home in the US

The summit was held on September 5, just three days before Queen Elizabeth’s death. Harry and Meghan, who now live in the United States, had returned to Europe for different engagements. After attending One Young World, they flew to Düsseldorf, Germany for the Dusseldorf 2023 – One Year To Goa sporting event for war veterans organized by Invictus Gamescreated by the Duke of Sussex

Harry and Meghan, a book reveals background on the royal family

Two days later they had to leave Germany and leave for Scotland, where – in the castle of Balmoral – Elizabeth II died. Despite the tensions that from 2020, according to press indiscretions, would mark relations with the royal family, both Harry and Meghan took part in the funeral ceremonies for the longest-lived sovereign in the history of the English crown

Death Elizabeth, the background: quarrel between Harry and Carlo for Meghan

According to commentators on the vicissitudes of the family, even the recent photos would testify in favor of the thesis that not even the death of Elizabeth II was able to alleviate the disagreements. Two days before the Harry and Meghan photos were released, Buckingham Palace released the first official photo of King Charles III and queen consort Camilla next toheir to the throne William and the Princess of Wales Kate

The image marked the end of the mourning period for the death of Elizabeth II and officially entered William and Kate in the heart of the monarchy, according to the British media. In the photo the king has a relaxed posture, with his left hand in his jacket pocket and with his right arm embracing his wife Camilla

To the left of King Charles III, William holds his wife by the hand. All four protagonists are dressed in black, according to the dictates of mourning, the men with the black tie. The photo, writes the Daily Maildates back to eve of the funeral. Harry and Meghan are nowhere to be seendespite they were present