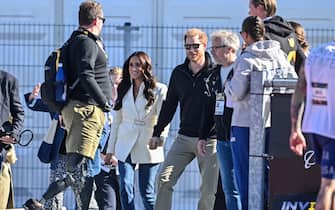 Harry and Meghan Markle returned to Europe together for the Invictus Gamesan international sporting event founded by the Duke of Sussex himself to help injured military veterans held in The Hague, The Netherlands

As reported by several British media, it is the the couple’s first public outing in the Old Continent since the two decided not to be “senior members” of the royal family anymore. The last time they had attended an official event together in Europe was Monday, March 9, 2020. Harry later returned for his grandfather’s funeral, but without his wife.

For two years, the couple have now lived in California with their two children, Archie and Lilibet Diana, and have actually become more independent from the royal family as she had announced. Harry found several jobs while Meghan voiced the documentary film ‘Elephant’.

Unstoppable Harry: after a mental health job, a job against fake news

As reported The Guardian, i Dukes of Sussex have also signed a $ 100 million contract with Netflix. Among other things, the project includes the release of the documentary Heart of Invictus which will show the preparation of the athletes participating in the sporting event of the same name and will be produced by Archewell Productions, a company launched by the couple. Precisely for this reason, Harry and Meghan do not travel alone but with a crew

Heart of Invictus, here is the first project by Harry and Meghan Markle for Netflix

In the Netherlands, the couple first took part in the opening night of the Games, which took place on Saturday 16 April. Speaking in front of an audience of people also made up of the Dutch royal family and the premier, Mark Rutte, both Meghan and Harry expressed their closeness to the Ukrainians. “My husband and I know it took a long time to get here, both physically and on a motive level. Especially for the Ukrainian team. We are all with you,” said the Duchess.

“You told me you would come not only to show your strength, but also to tell your truth, the truth, what is happening in your country,” said Harry. “You know we are by your side. The world is on your side but you deserve even more”, he added (in the photo the prince with some athletes, including a Ukrainian)

On Sunday 17 April, Meghan and Harry then attended the competitions between athletes

The couple showed themselves as always very united and stopped to talk to the athletes. Here she while she poses with the Iraqi team

Before flying to the Netherlands, the couple also allegedly met the Queen Elizabeth and Prince Charles at Windsor Castle. The meeting would have been informal, but not much else is known. When Harry and Meghan announced that they wanted to become more independent, the sovereign had issued a statement in which she made it known that she supported this need. In these two years, however, the relations between the royal family and the two dukes would not have been idyllic

Meghan Interview: “The Royal House feared that Archie had too dark skin”. VIDEO

Harry and Meghan at the Games in Holland