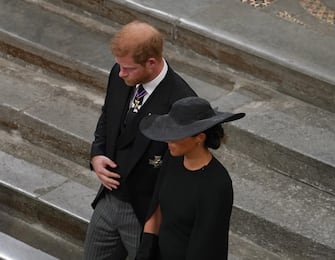 During the funeral of Queen Elizabeth II, which took place on 19 September, the special observers were certainly the members of the British royal family. In the spotlight, in particular, they ended up Harry and Meghanalready at the center of the debate after the couple’s farewell to the Crown in 2020 and the recent tensions with the new King Charles III and the heir to the throne William

WATCH THE VIDEO: Goodbye Elizabeth II, the leaders at the sovereign’s funeral

According to viewers and social media users, the Duke of Sussex would not have sung with the rest of the Royal Family and the assembly at least a part of the words of the national anthem – revised and corrected in the “God Save the King” version after the succession of Charles to Elizabeth on the throne – at the end of the funeral rite

THE SPECIAL OF SKY TG24: GOODBYE TO THE QUEEN

The British media however, they specified: some images actually suggest some initial hesitation on the part of the prince, attributable, however, to the emotion of the moment. But – as the Daily Express notes – the full video actually “clearly shows that the Duke is singing”. And he seems to move his lips in unison “with the rest of the family”

THE TALE OF FUNERALS

Hymn aside, certainly tensions with the Royal Family there are. Harry’s father, King Charles III, has decided to revoke the title of “His Royal Highness” from the children of Harry and Meghan by changing an existing law. In addition, the grandmother’s initials were removed from the uniform of the second child. On the question ofuniform, it should be remembered that Harry has been granted a waiver that he has allowed to wear it – no longer a “working Royal” would not pose – during the vigil. But, precisely, without the initials of Elizabeth II

THE CEREMONY AND THE BURIAL

As for Meghanthe photos have immortalized her while he was crying during the celebrations of September 19th. Harry’s wife wiped a tear from her face, bringing a gloved hand to her face. And the gesture was taken up by photographers

GREETINGS FROM THE ROYAL FAMILY

The Duchess has put a wide-brimmed hat, but the veil was missing, a symbol of condolence. A detail that places it once again far from the dictates of the royal family and the style of Kate, William’s wife, who instead wore the veil at the funeral. However, it should be noted that Meghan wore pearl earrings, a gift that Queen Elizabeth gave her when she welcomed her into the family

In the picture, Kate with hat and veil and Meghan with hat without the detail of the veil. Both with their hair tied up and in a long black dress, as a sign of mourning, they were immortalized in this shot behind the little Prince George and Princess Charlotte, children of William and Kate