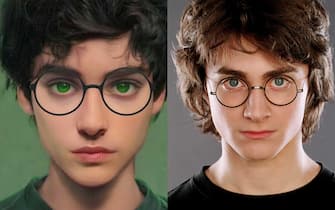 Harry Potter he is described as a tall, thin boy with perpetually untidy black hair, light green eyes behind a pair of thick round glasses. Very similar to his father James, apart from his eyes, inherited from his mother Lily

Hermione Granger She is described as a girl with brown eyes, thick, slightly frizzy dark brown hair and rather large deer front teeth (never described as beautiful or ugly). These are fixed after she is given a spell by Draco Malfoy to make her teeth grow out of proportion in her fourth book. She in treating them she makes her so that they are shrunk more than she had them before her, thus earning a beautiful smile.

Ronald Weasley he inherited the typical traits of his family: fiery red hair and a freckled complexion. When she gets embarrassed his ears turn red. He has large blue eyes, a long nose, and is described as very tall and lanky, with very large hands and feet.

Harry Potter and the Deathly Hallows – differences between film and book

Remus Lupine is a tall, slouching man of about 38 years. His body is scarred, a sign of his curse: lycanthropy. He has light brown hair streaked with gray, premature wrinkles and stress aging caused by constant transformations. Generally he looks exhausted and sick

Harry Potter and the Order of the Phoenix, 10 curiosities about the film

Sirius Black he is a tall, thin man and, in his youth, is described as very handsome. His hair is long and dark, he has piercing gray eyes, and an attitude of “casual elegance”. He too, like all other members of the Black Family, was arrogant, and as a young man attracted the attention of many girls

Harry Potter and the Prisoner of Azkaban, differences between film and book

Severus Snape he is tall and thin, with black, greasy shoulder length hair, a hooked nose, olive skin and uneven teeth. Eyes black but devoid of heat, cold and empty like two tunnels immersed in the dark. He almost always wears a long black cape, and occasionally green only during the Quidditch finals. To sleep he uses a gray nightgown

Harry Potter, the actors who could become characters in the saga

Fleur Delacour she is tall and slender, with an air that makes her look as if she is sliding on water as she walks. Her hair is a beautiful silver-blonde color as well as being very long, almost to the waist. Her eye color is deep blue, in perfect sync with fair skin

The reunion of the cast of Harry Potter after 20 years: the first photo

Daniel Radcliffe and the difficult relationship with Harry Potter

Dolores Umbridge she is stocky, with a broad face and a short neck like that of her Uncle Vernon. Her mouth is also very large and soft. Her brown eyes are large, round and slightly bulging

JK Rowling reveals: “I have been a victim of domestic abuse”

Nymphadora Tonks he has dark eyes while his face is heart-shaped, tending to dark. Being a “Metamorphomagus” she can change every part of her body to her liking from the color of the hair to the eyes

In his early years Tom Riddle he is a good-looking boy, with a pale complexion, dark hair and brown eyes

Neville Longbottom he is described as a short, chubby boy with a round face and blond hair

Fantastic Beasts and Where to Find Them, 5 curiosities about the film

The look by Bellatrix Lestrange is described in the pages of JK Rowling’s novels as that a beautiful woman of about 40, with long thick shiny black hair, strong jaw, dark eyes with deep dark circles and thin lips

Narcissa Malfoy she is blonde, with long soft hair, deep blue eyes, which reveal a strong apprehension and concern for her husband and son, who are practically her whole life

Argus Magpie he is described as a rheumatic man, with hunched shoulders and a little hunchback. His is his face looks hideous, bulging eyes along with sunken, veined cheeks. His hair is long

10 curiosities about Harry Potter and the Half-Blood Prince

Luna Lovegood she is described with long, tousled blonde hair, gray eyes and thin eyebrows. She has always had her own style of dressing, which others often found extremely bizarre

10 curiosities about Harry Potter and the prisoner of Azkaban

Draco Malfoy he has a lean, lean and slender physique. Her face, elongated in shape and with aristocratic features, is framed by two gray eyes, magnetic and very pungent. Meaty mouth often moved by a spasm of contemptuous laughter and the rest of the time, by uncontrolled contempt for what she sees

Rupert Grint: This is how the Harry Potter actor became

Geneva Weasley is described as a petite but attractive girl with a freckled face, bright brown eyes and long fiery red hair

Harry Potter today: what happened to the actors of the cast

Cho Chang she is described as an extremely pretty girl with long dark shiny hair, a freckled nose, a little shorter than Harry Potter

Bill Weasley he is described as tall, with naturally bright orange hair often pulled back into a ponytail. He has freckles like any Weasley and wears a fang-shaped earring, a look that made his mother feel sorry for himself.

Peter Minus he is described as decidedly unattractive, characterized by a face that resembles that of a mouse. His eyes are small and blue, his nose pointed, his hair, always tousled, is thin and colorless.

Vernon Dursley is a big, sturdy man with a tendency to fat. He has black hair and a big walrus mustache, dark eyes, small and sharp