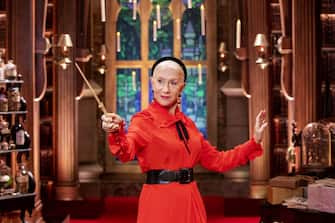 In a red dress, Helen Mirren starts the second installment of the Harry Potter quiz show – Tournament of Hogwarts Houses

Harry Potter becomes an epic quiz show on Sky One

Harry Potter – the Tournament of the Houses of Hogwarts, the photos of the first episode

For the Ravenclaws are Annie, Vincent and Louise

The reunion of the cast of Harry Potter after 20 years: the first photo

Giulia, Michelle and Ryan accept the challenge for the Slytherin house

During the first three rounds of the quiz, Ravenclaws don’t miss an answer by keeping the score high

Helen Mirren leads the program, giving a voice not only to Harry Potter fans but also to special guests

In addition to the three Slytherins, in the second part of the quiz the house can also answer the questions by helping the three competitors in the race to raise the score

The same for the Ravenclaws, who at the end of the quiz, the sum of the answers given by their house leads them straight to victory.

The house of the Slytherins also gave correct answers, but their score is not enough to beat the Ravenclaws

The next appointment with the epic quiz is on December 29th at 20.10 on Sky Uno