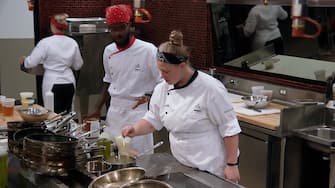 During the final, Chef Ramsay planned an exciting reunion for the three remaining chefs – Kiya Willhelm, Megan Gill and Trenton – before they were tasked with cooking a five-course dinner rated by famous judges.

Hell’s Kitchen Usa, the challenge is on Sky Uno

Megan and Trenton were chosen as the last two chefs and, in the second hour of the final, they chose their brigades

Together with the former contestants, the three finalists competed by serving their latest dinner service

At the end of the two hours, it was Trenton who won Hell’s Kitchen season 20

For the first time in the program’s history, Hell’s Kitchen: Young Guns featured 18 aspiring chefs from across the country who were all 24 or younger at the start of the competition.

The photos of the final of Hell’s Kitchen USA 20

The last serve before being crowned the winner of Trenton Garvey