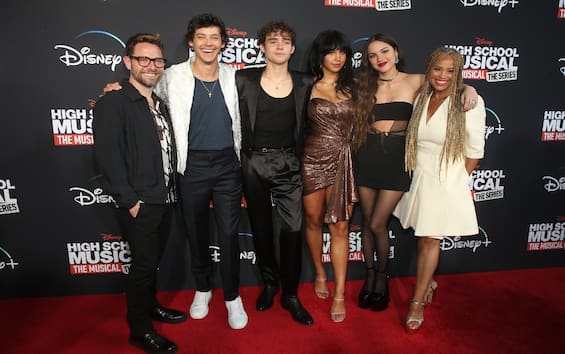 “It’s now or never. There fourth season from High School Musical: The Musical – The Series is coming and promises to be the best ever. ” Disney he announced it with a post on Instagram, under which hundreds of enthusiastic fan comments were immediately recorded, and during the D23 Expo on 10 September important advances on the plot.

HIGH SCHOOL MUSICAL: THE MUSICAL – THE SERIES, NEW FOR THE FOURTH SEASON

Based on the Disney Channel films of the same name from the early 2000s, the spin-off series can already count on three lucky seasons, the latest of which was released on the Disney + streaming platform on July 27th. The protagonists are the boys of the team Wildcats who have spent a romantic summer in Camp Shallow Lake and now they are ready to go back toEast High. Here, a surprise awaits the students: not only will they have to stage a production of High School Musical 3: Senior Yearthe 2008 film, but will also be involved in the making of High School Musical 4: The Reunion. Ricky, Gina, EJ, Kourtney and the rest of the school’s theater club will find that the original cast is reuniting for thewaiting for the fourth film and there might be room for them too. The rumors that have been circulating for some time about a potential High School Musical 4 would therefore seem confirmed and the intertwining of stories between the series and the films bodes well.

HIGH SCHOOL MUSICAL: THE MUSICAL, WHAT CHANGES IN THE CAST

Many details about the new season of the series are jealously guarded by the producers but it is likely that many well-known faces will return to walk the corridors of East High for the last year of school. Among others Joshua Bassett aka Ricky, Sofia Wylie as Gina, Julia Lester as Ashlyn And Frankie Rodriguez aka Carlos Rodriguez. The star Olivia Rodrigo, on the other hand, he will not reprise the role of Nini Salazar-Roberts, after his part had already been reduced in the third season. The cantate, last July 28, had dedicated a video-message of good wishes and affection towards the castmates and the fans and shared a photo with the whole team, demonstrating the gratitude felt for the part in the series. At the time showrunner Tim Federleconfirming the news in an interview with Entertainment Tonight, he said he was proud of his path and that he was able to support her in the best possible way. “Helping Olivia out of the East High corridors – added Federle in an interview with ET – seemed like the right thing to do”.

HIGH SCHOOL MUSICAL, THE SONGS OF THE FOURTH SEASON

With these advances, curiosity for new ones also grows soundtracks of the fourth season. They have already been resubmitted in the past iconic songs of the franchise of the same name High School Musical and of Camp Rock, another product from Disnkey. And then again the classics de The beauty and the Beast And Frozen, but also original pieces, written specifically for the series, such as “All i Want” and “The Rose Song” by the same protagonists Olivia Rodriguez and Joshua Bassett. At this point in the story, it is legitimate to make some assumptions about the nine songs, which will perhaps be taken from the third film of the saga. Tim Federle and the magazine spoke again on the subject Seventeen he explained how musical choices are made: “There are three categories of songs on our show – he said – that I am ‘musical-in-musical’, Disney Channel originals and new original tracks“In short, even in this fourth season there will be a mix of old school and new, probable, hits.

With the staging of the original cast reunion for High School Musical 4: The Reunionhere we talk about the possibility that Zac Efron take the role of the captain of the Wildcats, Troy Bolton. Last May the actor told the magazine AND! he said he was enthusiastic about this possibility. “Having the opportunity, in any form, to go back and work with that team would be fantastic,” said the star, now 34. “My heart is still there. It would be unbelievable. I hope it happens ”. Corbin Bleuanother of the actors of the original cast, has already reappeared as guest star in the third season of the series High School Musical: The Musicalwho knows that soon we will not see the complete team on the screens.