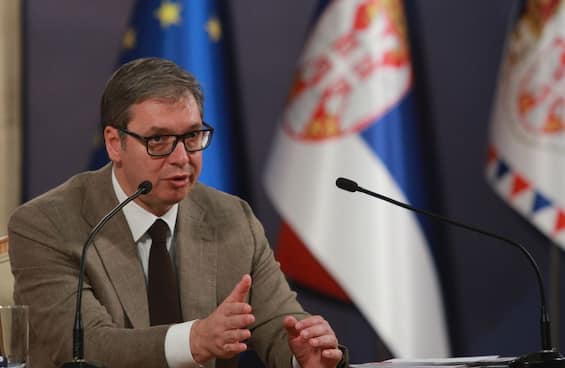 New tensions have arisen this evening between Kosovo and Serbia and there are those who fear an armed clash between the two countries. The Serbs do not accept the new measures launched by Pristina on the ban on Serbian identity documents and license plates in Kosovo starting tomorrow, August 1st. According to the Russian agency Tass, which quotes the newspaper Vecherne Novosti, the special forces of Kosovo have been moved from Prisitina to the north and to Metohija, where protests by Serbian citizens are underway. Earlier it was reported that the Serbian population of Kosovo and Metohija protested on the main highways of the region, started building barricades, several dozen people blocked the main road between Pristina and Raska. Special units of the Kosovo police, present on the streets, began to retreat to the surrounding villages when the citizens’ rally began. Sirens are sounded in the northern part of the town of Kosovska Mitrovica.

Subsequently, information appeared about sirens sounded to Zubin Potok. According to Serbian media, around 200 Albanians gathered on the Albanian side of the bridge connecting the north and south of Kosovska Mitrovica. “Serbia has never been in such a complex and difficult situation: we have had talks with representatives of the Serbs of Kosovo and Metohija and we will try to keep the peace. But I ask the Albanians to change their position and the Kosovo Serbs not to give in to provocations “: thus, in a speech to the nation, Serbian President Aleksandar Vucic, referring to the tensions that have arisen between his country and Kosovo due to the law that will prohibit, starting from tomorrow, Serbian identity documents and license plates in Kosovo . “Outlawed” Serbian groups opened fire on Kosovar police on the border with Serbia. said the Kosovar premier, Albin Kurti, according to reports from the Turkish news agency Anadolu. Since the 1999 war, Kosovo had tolerated the use of license plates issued by Serbian institutions in four municipalities in the north of the country where Serbian majorities are present. From now on, the use of plates with the acronym Rks, i.e. Republic of Kosovo, will be mandatory. Car owners have until the end of September to make the change.

“We appeal to Pristina, and to the US and the EU that support it, to put an end to the provocations and to observe the rights of the Kosovo Serbs”. This was stated by the spokeswoman of the Russian Foreign Ministry, Maria Zakharova. The spokeswoman, quoted by Tass, denounced the new rules imposed by the Kosovar authorities and in force since Monday as discriminatory. “The Kosovar leaders know that the Serbs will not remain indifferent to a direct attack on their freedom,” she added, stating that the target of this attack is Belgrade itself.