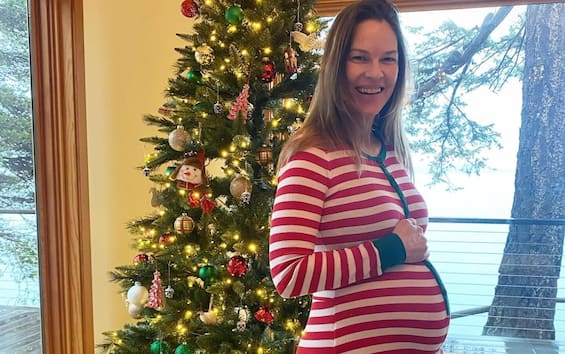 Among many social snaps of the Christmas of the VIPs 2022 that of Hilary Swank with the baby bump in front oflighted fir undoubtedly deserves a special place.
The award-winning actress is overjoyed at the idea of ​​becoming a first-time mom and doesn’t hesitate to share with her fans the emotions of a pregnancy that she continues to describe as a splendid miracle.

It’s been just over two months since Hilary Swank told the world she was expecting children but the actress looks still incredulous of what is happening to her.
In the photo taken in front of the tree of his house, the star of Million Dollar Baby she is proud and happy of her curves, on full display in a red and white striped jumpsuit reminiscent of Christmas candy canes.
“I am so thankful for these two life gifts”, wrote the 48-year-old on her official profile which she used again the word miracle to describe her pregnancy.
Last October, in the study of Good Morning America, Swank had used the same expression on the occasion of the guest in which she said she was pregnant. And, speaking of miracles, she adds in the post: “I wish you miracles in your lives, whatever form they may take”.

The social story of pregnancy

Hilary Swank is documenting her wait on social media: her Christmas photo with her baby bump it’s not the first of this type appeared on Instagram.
A little over a week ago, in fact, a first photo taken in the same environment appeared on Meta’s social network, with the Swank trying to decorate the tree in the company of his two four-legged friends. The caption, in that case, was a play on words with a line by All I Want For Christmas by Mariah Carey.
Good humor and a lot of joy, therefore, to wipe out the pains of a very painful season for the actress, that of her father’s death that she witnessed until the end, an immense pain that she is now trying to overcome with the help of the man who brought her back to life, the entrepreneur Philip Schneider whom she married in 2018.