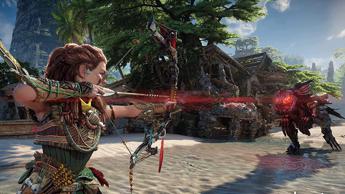 Aloy returns to PlayStation with a mammoth game, a real test for the new generation of consoles

The huntress Aloy, clone of a scientist of the past and the only one able to solve the threat of rebel machines that grips a humanity born on the ashes of the previous one, is now in all respects one of the iconic characters of PlayStation Studios. Five years after the first chapter, the Dutch of Guerrilla Games are back with a second episode that also has the burden of being the first major sequel to a famous Sony series designed for PlayStation 5 (if we exclude the excellent Ratchet & Clank: Rift Apart). Horizon Forbidden West It is also available on PS4, but is clearly polished and reasoned to make the most of the capabilities of the new generation. And indeed, the open world of exploration in the Forbidden West is livelier and more spectacular, and the faces of the characters are compelling and engaging. Not only with regard to the protagonist Aloy, who also always stands out as an atypical and charismatic hero: after a few hours of play certainly a bit difficult, in which the title makes us familiar with her RPG ambitions while remaining a classic action adventure, we will end up becoming attached once again and even more to this heroine of a future that seems past.


The magic of Horizon Forbidden West it is above all here: in a world constructed in a coherent and multifaceted way. Aloy’s journey in search of a solution to stop the fury of the machines and discover their origin will pass through four territories dominated by as many tribes, each with its own uses and customs. And nothing is left to chance, because Guerrilla has created an excellent narrative system that is based on the uses, customs, characteristics and geography of the various areas. Freedom of exploration is never absolute, because open world mechanics always tend to give way a little to narration and what is actually possible to do in the game. There are insurmountable barriers and the climb, here expanded with respect to the first chapter, never exceeds any limit that is put in front of us. Not bad, because Forbidden West make up for it with a plentiful amount of missions. Between main and secondary, these too never left to chance, it is not impossible to stay glued to the game for even 100 total hours. Forbidden West it avoids the danger of repetitiveness typical of its genre with a plot never left to chance, with the feeling that going back and forth on the game map is never a waste of time, and with some twists with a sure impact.

As in the previous game, Aloy can hack machines to subject them to his purposes, for example by riding them as a means of transportation. All in a very pronounced stealth perspective also in this case. Never frustrating: if it is true that you can choose between five difficulty levels and activate or not the guided mode to proceed, on the other hand, even at a “normal” level, the intelligence of the enemies is never calibrated to be unsurpassed. Aloy also acquires new weapons and new melee abilities, since among the enemies there are not only robots but also other human beings. As in the previous chapter, the progression of skills is entrusted to five trees to be completed by spending activity points. What remains altered, and which would have been better honed a bit, is the rich control system that activates the new moves learned. Often it is necessary to remember what to press to obtain that precise action that you may need only once in a while. The game still remains more about exploration than fighting, and often figuring out how to get to a certain goal or place is at the heart of the on-screen action. There is no shortage of side activities, including a board game in the game (Mechanical Knockout). Finally, Aloy purchases a new glider that allows her to glide, adding another tool to her scouting duties.

From a technical point of view, the game is not perfect but certainly impressive. A few pop-ups too many don’t detract much from the graphic impact, with settings full of details and convincing characters in their virtual acting. When something explodes in Horizon Forbidden West, it is impossible not to notice. Everything is spectacular, and if we don’t get involved enough the PS5’s DualSense ad hoc vibes will take care of it. On the latest Sony console it is possible choose between two graphics modes, one with 4K definition and 30fps frame rate, and the other with 60fps and dynamic resolution. The latter, thanks to greater fluidity, was our main choice. On PS4 and PS4 Pro, the game struggles sometimes but at the same time it’s even more beautiful to look at than the great The Last of Us Part II, so far the best technical result achieved by the previous generation. Finally, a mention for the outstanding soundtrackcomposed by Joris de Man, Niels Van De Leest and the duo The Flight, with the new entry of the composer Oleksa Lozowchuk.

If you loved the first chapter, you will be immediately captured by this sequel, which picks up exactly where we left off Aloy five years ago. The game system has been improved from several points of view but neither revolutionized nor upset, so it will be clear from the first minutes what to expect. If, on the other hand, this is your first experience as Aloy, we recommend you first retrieve the previous chapter or at least inform you about the plot and characters of this universe. Guerrilla made the choice to take many things for granted, as if we had played them yesterday. The new title tries to open with a summary of what has happened so far, but it is absolutely not enough to appreciate the plot and the relationships between the characters of Forbidden West. After playing this second chapter, however, it is clear that the future of Horizon it is rosy and destined to continue. Aloy is one of the iconic faces of 1920s video games, and he deserves it unreservedly.