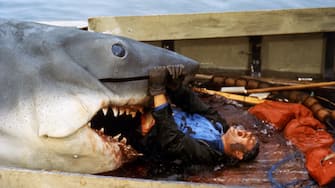 Sometimes a detail is enough to impress the world. For example, a black appendage that emerges from the sea and turns into a nightmare for all vessels. That menacing dorsal fin didn’t just frighten millions of spectators scattered across the globe. The cartilaginous triangle of Carcharodon carcharias has forever marked the history of the seventh art. After The Shark directed by Steven Spielberg in 1975, (PHOTO) cinema has never been the same.

The Shark, all the secrets of the film

Creature from the Black Lagoon is a 1954 sci-fi horror film directed by Jack Arnold, shot in black and white in stereoscopic format. Considered a cult film, it is one of the most famous cinematographic works of the 1950s and one of the classics in the history of science fiction cinema. Its success triggered the production of two sequels (The Monster’s Revenge of 1955 and The Terror of the World of 1956). The creature has become a pop icon, not just in the cinematic world.

Piraña is a 1978 film directed by Joe Dante. It is a sort of sardonic parody of The Jaws, signed by Steven Spielberg in 1975. Unforgettable the cameo of Barbara Steele., The scream queen par antononomasia.

Paradise Beach – The Shallows is a 2016 film directed by Jaume Collet-Serra, starring Blake Lively who has to face a ravenous white shark in the waters of Mexico

Shark Bait, the trailer for the film

Anaconda is a 1997 film directed by Luis Llosa. The film, starring Jennifer Lopez, Jon Voight and Owen Wilson, had three sequels: Anaconda – In Search of the Cursed Orchid, Anaconda 3 – The New Bloodline and Anaconda – The Path of Blood.

In Lake Placid, a 1999 film directed by Steve Miner, a giant crocodile causes panic in a small town. In the cast Bill Pulman, Bridget Fonda and Oliver Platt

The Deep House is a 2021 film directed by Alexandre Bustillo and Julien Maury.

Dead Calm is a 1989 film directed by Phillip Noyce and starring Nicole Kidman, Sam Neill and Billy Zane. It is based on the novel Dead Point (1963) by Charles Williams. This time the villain is not a sharp-toothed sea creature, but a psychopathic nufrago prone to murder

Shark – The Meg is a 2018 film directed by Jon Turteltaub. The film, starring Jason Statham, is the film adaptation of the 1997 sci-fi horror novel MEG written by Steve Alten.

In La zatttera, an episode taken from Creepshow 2, two couples of lovers go on a romantic outing, out of season, on the shores of a lake, attracted by the idea of ​​spending a few hours in solitude on the floating platform located in the middle of the water. . Although the climate is particularly harsh and the waters of the lake are very cold, the boys still decide to dive to reach it. Once they arrive, they realize that there is a monstrous agglomeration of slimy matter in the lake.

The Abyss is a 1989 film written and directed by James Cameron, and starring Ed Harris, Mary Elizabeth Mastrantonio and Michael Biehn.

Alligator is a 1980 film, directed by Lewis Teague and focused on the urban legend that wants the sewers of some American metropolis infested with alligators.

Deep Rising is a 1998 film written and directed by Stephen Sommers.

47 Meters Down is a 2017 horror-thriller film directed by Johannes Roberts.