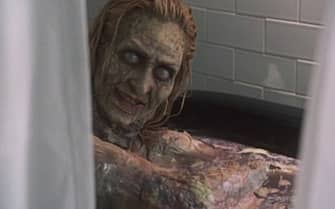 Each of us carries with us a ranking of the scariest scenes from films seen in the cinema or on television. Images that still today cause uncontrolled outbursts of terror. There are those who manage to metabolize them over time and those who are constantly terrified of them. So here are twenty-five scenes that are hard to forget.

The 35 scariest films ever made: a scientific study confirms this

In 1978, John Carpenter with Halloween – Night of the Witches gave rise to one of the longest-running horror sagas in the history of cinema. And the scene where babysitter Laurie Strode (Jamie Lee Curtis) hides in a closet to escape Michael Myer’s murderous rampage has rightfully entered the anthology of the scariest sequences of all time.

One of the scariest scenes dthe Suspiria by Dario Argento is that of the death of Sara, the character played by Stefania Casini. The girl is chased by an invisible figure; the young woman first takes refuge in the attic and then in a room that is revealed, but full of barbed wire. Sara tries to get rid of her, but her mysterious figure cuts her throat with a razor. Moreover, in reality, the actress was really trapped and the iron wire caused numerous friction bruises on her skin. The scene was shot only once.

Suspiria, discovering the secrets of the masterpiece directed by Dario Argento

Also in Hell, second chapter of the trilogy that Dario Argento dedicated to the “Three mothers” we find the scene of a truly terrifying murder. Rose Elliot, played by Irene Miracle, the young New York poetess who lives in the mansion of “Mater Tenebrarum” is brutally murdered in her apartment by a mysterious figure

Thrillmaster Dario Argento made another really scary scene in Phenomena (1985). Towards the end of the film, Jennifer (Jennifer Connelly) finally discovers the face of the son of Deputy Director Frau Brückner (Daria Niccolodi). The truly terrifying make-up was curated by the special effects magician Sergio Stivaletti who was inspired by the patients suffering from the rare Patau syndrome

Dario Argento and television told in a surprising book

The Shining, Stanley Kubrick’s masterpiece based on the Stephen King novel, is an anthology of hard-to-forget horror sequences. One of the most disturbing scenes is the one set in the bathroom of room 237 of the Overlook Hotel. Jack Torrance, played by Jack Nicholson, meets a beautiful young naked woman who comes to meet him and kisses him. But while she is in the man’s arms, the girl transforms into a decaying corpse.

The 40 most famous scenes set in the bathroom

Don’t Open That Door (The Texas Chain Saw Massacre) directed by Tobe Hooper in 1974 is one of the scariest horror films in the history of cinema. One of the most terrifying scenes in the film is when young student Pam (Teri McMinn) is hung by Leatherface on a butcher’s hook and is forced to watch “Leather Face” cut her friend Kirk’s corpse in half with a chainsaw. During the filming, the actress was supported by a nylon thread between her legs, a device that proved to be quite painful.

Leatherface, the prequel review for Don’t Open That Door

Produced, written and directed by Greg McLean in 2005 and set in Australia in 1999, Wolf Creek is a truly disturbing horror movie. One of the most heinous and frightening scenes is the one in which the Australian serial killer Mick Taylor (John Jarratt) breaks the spine and cuts off the fingers of the hand of the English tourist Liz (Cassandra Magrath). According to the killer it is a torture called “head on a stick” used by the Australian and New Zealand Army Corps during the Vietnam War.

The opening scene of Ghost Ship, a 2002 film directed by Steve Beck, is one of the most terrifying incipit in the history of cinema. The murder of the passengers and crew members of the luxury Italian ocean liner Antonia Graza it is one of those sequences that are not easily forgotten

Among the most famous and scary scenes of Carrie – Satan’s gazea, directed by Brian De Palma in 1976, there is certainly that of the school prom. The pig blood thrown on Sissy Spacek was actually corn starch syrup and food coloring. During the two-week shoot for the sequence, the actress decided to sleep in her bloody clothes for three days for the sake of continuity.

Psyco’s famous shower scene is the most famous of the film and one of the best known in the history of cinema. The sequence lasts only 45 seconds, but it took seven days of work, 72 camera positions and a stunt double for Janet Leigh. The stabbing lasts 22 seconds for a total of 35 shots, and in none of these you can see the knife sinking into Marion’s body. Hitchcock initially wanted the shower scene not to be accompanied by musical commentary, but Bernard Herrmann made him change his mind.

The transformation of David Kessler (David Naughton) into a werewolf in John Landis’ horror film An American Werewolf in London has become a cult for all fans of fear cinema. the e sequence was shot in six days with around ten hours a day spent applying makeup: five hours on set and three hours of makeup removal

In Saw 2 – The Solution to the Enigma, Amanda’s character, played by Shawnee Smith, ends up in a well full of syringes. The girl must be able to recover her antidote in order not to die from the nerve gas. It is one of the most disturbing scenes in the entire horror saga

Spieal, a clip from the film

In Luca Guadagnino’s Suspira, the death scene of Olga, a character played by Elena Fokina, is one of the scariest moments of the entire film

Suspiria, the review of Guadagnino’s film

A Quiet Place – A quiet place it’s a really terrifying movie. One of the most disturbing scenes is the one in which the character of Emily Blunt takes refuge in a bathtub

One of the most famous scenes of “AlienIs undoubtedly the one that sees the terrifying creature violently emerge from the chest of a helpless John Hurt. If the habit of special effects today allows us to look at this scene with much more determination, it is undeniable that it falls on the list of many, especially if belonging to a certain generation.

Much has been said and written about the interpretation of “Babadook“. A complex film that hides various levels of interpretation. But this is, at the same time, also a classic horror, which shows this aspect of itself in the terrifying nocturnal visit that the creature makes to Amelia.

Halloween, the most beautiful couples costumes of the stars to be inspired by. PHOTO

“The Blair Witch Project“It was an epochal film, having managed to terrify the public with only the psychological effect. Blurred shots and skyrocketing tension. Not seeing, as well as not knowing, have managed to obtain a devastating effect, much more than many other “jump scare scenes”. The ending of the film highlights this perfectly. Mike is fixed in a corner, motionless. Tension skyrockets and the camera falls and Heather screams in terror.

Impossible not to mention “The Exorcist”, Being one of the films that marked the horror imagery of a generation. Linda Blair’s head turning 180 ° will always remain something memorable.

“The Ring”Boasts one of the scariest horror scenes of the 2000s, capable of terrifying a generation. If Samara is already terrifying in itself, to the point of still being considered among the favorite characters of Halloween disguises, the video of her, together with the release from television, can only deserve a place in this ranking.

The best horror movies to see on Sky

It doesn’t take much to build a terrifying scene. In fact, many films have shown how the psychological effect definitely beats any scene rich in CGI or makeup. In “The Conjuring – The evocationCarolyn is seen trying to escape from her basement. From the darkness, however, a ghostly voice asks her: “Shall we play clapping?”. Two of her hands appear behind her, in total darkness, starting the game she used to play with her daughters.

Halloween, what to do if you are in a horror movie

However, special effects, if well managed, can generate timeless cult scenes. It is the case of “The thing”By John Carpenter, which exploits exciting effects for the time, even if today terribly vintage. Years pass but the terror remains when Cooper attempts to revive Norris, who appears to be suffering from a heart attack. Too bad, however, that the man’s chest is suddenly deformed, showing two rows of teeth that sever the doctor’s arms.

“The Descent – Descent into darkness”Has the advantage of creating an atmosphere far removed from that of horror classics. Three friends are on one of their typical adventures. They have delicate stories behind them, and facing some claustrophobic caves in the Appalachians is a bit of a symbol of rebirth. But something moves in the dark and, as the audience is caught up in Juno’s story, they suddenly realize that the film has just changed focus, showing a bloodthirsty creature.

“Rec”Is set in a quarantined building in Barcelona. The protagonist is Angela, who soon becomes the news, finding herself in quarantine to narrate each event in a terrifying video. The finale is heart-pounding and, while she looks like she can make it, Angela approaches her camera, desperate, only to be dragged into the darkness behind her.

An excellent “jump scare scene” is that of “InsidiousWhich generates tremendous tension and finally shows the demonic creature Lorrain talks about behind Josh’s back. Out of the shadows and into their life, albeit for a moment, but that’s enough for the public to jump from their chair.