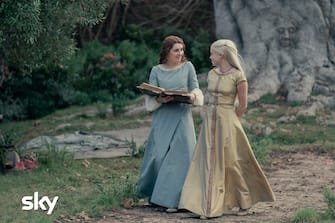 House of the Dragon is the highly anticipated spin-off de Game of thrones. The HBO series, whose first season will consist of 10 episodes, will be broadcast in Italy exclusively on Sky Atlantic and streamed only on NOW, starting from 22 August, absolutely simultaneously with the broadcast in the United States.

WATCH THE VIDEO: House of the Dragon, the trailer of the series aired on Sky from 22 August

The series will be set 300 years earlier than the facts narrated there Game of thrones, and will see at the center of the narration the events of the house of the Targaryen, ancestors of Daenerys. The spin-off is based on the fantasy novel Fire & Blood by George RR Martin

House of the Dragon, everything you need to know about the TV series

Daenys the Dreamer, daughter of Aenar, foretells to the Targaryens that a cataclysm will destroy all lands of Valyria. The prophesied destiny is fulfilled and the Targaryens remain the only dragonlords still alive

House of the Dragon, the key art of the series

From Dragonstone, Aenys I, an incest child of Aegon the Conqueror, fights to defend the legendary Iron Throne, which her father once built. Among the many enemies there are also family members, convinced that Aenys I is not suitable to sit on that throne. Very soon, the Targaryens will find themselves in the midst of a civil war, which has gone down in history as the Dance of Dragons.

Game of Thrones, HBO is thinking of a sequel focused on Jon Snow

Emma D’Arcy is Rhaenyra Targaryen, daughter of King Viserys and designated heir to the Iron Throne. But “a woman will never inherit the Iron Throne, because that is the order of things”

House of the Dragon, the teaser trailer. VIDEO

House of the Dragon, each episode cost $ 20 million

Each episode of the first season of House of the Dragon cost HBO $ 20 million. That’s 5 million more than the cost for a single episode of the last season of Game of Thrones, a small increase when you consider the large increase in the number of dragons and in the consecutive use of computer graphics.

Game of Thrones, all spin-offs in development

House of the Dragon, here’s how the series will be different from Game of Thrones

Filming for the first season began in April 2021 and took place primarily in the UK. Some shots were taken in Cornwall, others in Spain, in the province of Caceres, in Portugal, at the castle of Monsanto, and finally in California. Production ended in February 2022

The Targaryen symbol in the series will be that of the three-headed dragon with four legs, the second to appear in Game of thrones, after the coat of arms had been a three-headed dragon with two legs in the first few seasons. To explain why was the showrunner Ryan Condal: it would in fact be the original symbol of the family, before its fall and the loss of its own coat of arms, brought back into vogue only later by Daenerys, in seasons 6 and 7 of Game of thrones